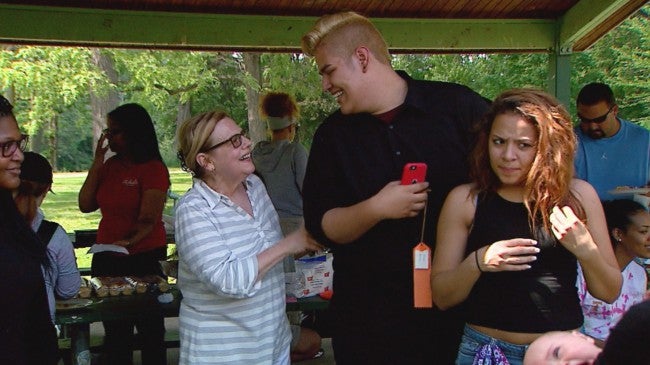 INDIANAPOLIS (WISH) — After 44 years of teaching, one Indianapolis educator is going out with a bang.

Doris Young is not only retiring from Broad Ripple Magnet High School for The Arts and Humanities next week, but she’s leaving having just earned the distinction of being a life-changing teacher.

The English and Humanities teacher is doing what she spent decades doing in the classroom – loving her students.

“It’s a calling. If you’re going into it because you want a job and you think you have the summers off, don’t, because you’re absolutely wrong,” said Young.

This week, Young won a $25,000 life-changing teacher award. After just a few minutes with Doris and her kids, you see why.

“The first thing I ask them to do is to write a paragraph telling me something that they think i should know about them and I promise them I won’t share it with anybody unless it’s self-destructive,” said Young.

Michaela McCulley is the Salutatorian this year. She loved having Young for a teacher.

“She’s wonderful,” said McCulley. “My freshman year I went through some struggles with being sick, and i know she was the only teacher that was calling everyday and telling my mom that i needed to go to the doctor. Everybody just loves her, everybody goes to her when they have a problem, or if something’s wrong, she’s just there to ask what’s wrong and help fix it.”

Fellow teacher Bruce Macallister nominated Young. “She was the one that could look at students and see that they were struggling for food, clothing, shelter, gas bill, water bill, a pair of shoes, whatever it may be and would reach into her pocket,” said Macallister.

So what does she think is the secret to being a good teacher?

“You have to care,” said Young. “Not just about what they learn, but who they are, I guess that’s the secret. And I’m not afraid to make a fool of myself, you know. I’m not afraid to walk into the room with a witches hat on my head just to get their attention.”

In 44 years, she’s seen changes in hairstyles, hemlines and of course technology, but what has remained the same is what she gives and expects of her students.

“I tell them six hugs a day,” said Young. ” If I can be one of them, good for me and good for them. I expect them to be decent, kind, loving, educated human beings, that’s what I expect, with really good grammar,” Young laughs.

Doris says while she’s grateful for the Hubbard cash prize, she is more thankful for what her students said about her.

As for what’s next, she’s waiting for word concerning an appointment to a non-profit, other than that, she’s not quite sure.