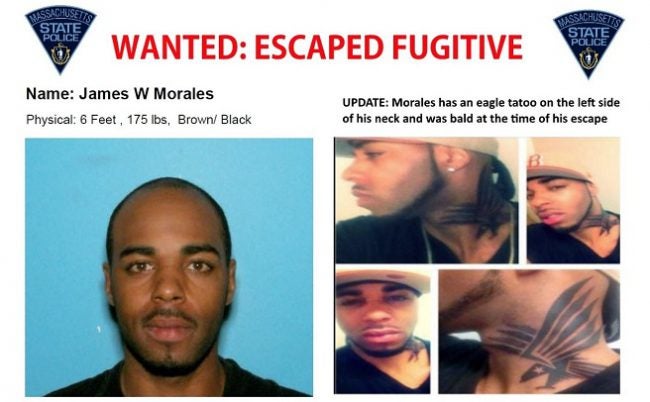 CENTRAL FALLS, R.I. (WPRI) – The warden of the detention center where an inmate escaped on Saturday says he did so by climbing a basketball hoop during recreation time, cutting his way through a fence covering the recreation area, climbing onto the facility’s roof and then shimmying down the building.

Warden Daniel Martin said it took three and a half hours for correctional officers at the Wyatt Detention Center to discover James Walker Morales was missing, during a 10:30 pm inmate count at the facility. Video evidence shows Morales escaped at 7 p.m., according to Martin.

“He should’ve been detected missing before he was,” he said.

The prison is now on lockdown, and Martin said the staff would be evaluating security procedures, including detection systems and staffing. He said Morales apparently walked through several rows of “extremely sharp” razor ribbons on the roof before descending to the ground, and had some sort of tool he used to cut the fencing once he climbed on top of the basketball hoop.

Two correctional officers have since been placed on administrative leave, according to the warden’s assistant.

Local, state and federal authorities continued their search Monday for Morales, 35, a former Army reservist who was being held on the alleged theft of 16 rifles and pistols from an Army Reserve armory in Worcester in 2015.

Massachusetts State Police believe that after escaping, Morales fled north into Attleboro, where a K-9 unit was able to follow a partial trail to an I-95 overpass near the state line. At the end of the trail, troopers found bloody prison clothing. The track ended abruptly and police think Morales might have gotten into a car there.

Police believe Morales stole a green Chevrolet Lumina from the parking lot of BK Mart on Washington Street in Attleboro on Saturday night. Troopers recovered the car in an undisclosed location the following night.

Officials say Morales stands 6 feet tall, weighs about 175 pounds, and has brown skin, black hair and an eagle tattoo on the left side of his neck. It’s believed he was hurt by razor wire while climbing a fence during his escape.

Anyone with knowledge of Morales’ whereabouts is urged to immediately call 911.