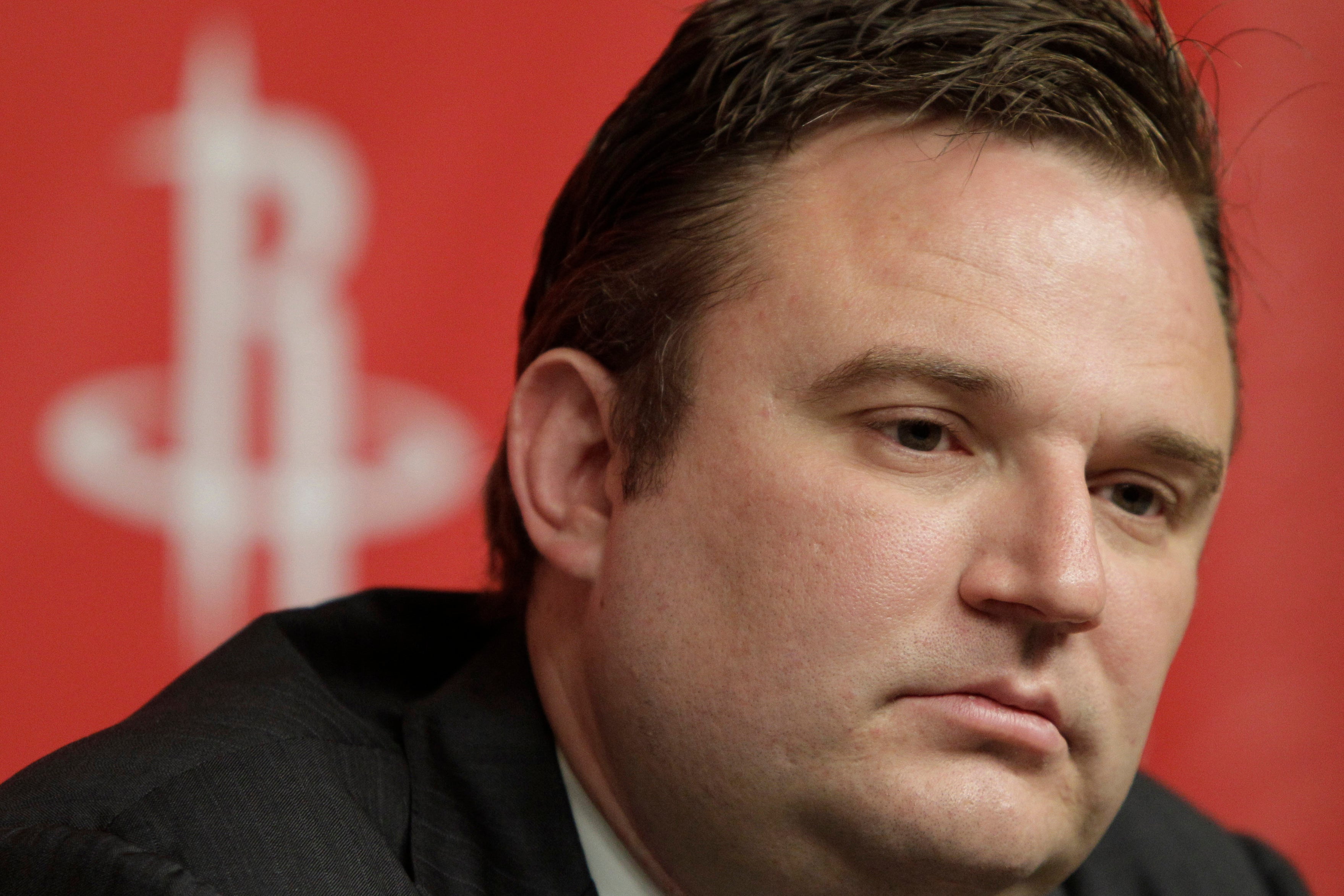 FILE - In this April 19, 2011, file photo, Houston Rockets general manager Daryl Morey discusses the direction of the team with the media during a basketball news conference, in Houston, after the decision to part ways with NBA basketball head coach Rick Adelman. Morey tried Sunday, Oct. 6, 2019 to defuse the rapidly growing fallout over his deleted tweet that showed support for Hong Kong anti-government protesters, saying he did not intend to offend any of the team's Chinese fans or sponsors. (AP Photo/Pat Sullivan, File)
by:
Posted: Oct 6, 2019 / 11:58 PM EST / Updated: Oct 6, 2019 / 11:58 PM EST

BEIJING (AP) — Houston Rockets general manager Daryl Morey tried Sunday to defuse the rapidly growing fallout over his deleted tweet that showed support for Hong Kong anti-government protesters, saying he did not intend to offend any of the team’s Chinese fans or sponsors.

A short time after Morey posted that statement, the NBA said it was “regrettable” that the deleted tweet offended many in China. And all that followed several companies in China, including some of the NBA’s major business partners there, lashing out over Morey’s original tweet.

Morey tweeted an image that read “Fight for Freedom. Stand with Hong Kong.” referring to the four-month-old protests in the semi-autonomous Chinese territory. That led to Houston owner Tilman Fertitta turning to Twitter to say that Morey does not speak for the Rockets, and sparking an outcry that included the Chinese Basketball Association — whose president is Yao Ming, the former Rockets star center — saying it was suspending its relationship with the team.

Other criticism came from Tencent, a major media partner of the NBA in China with a streaming deal that is worth $1.5 billion over the next five years, and Chinese state television — both of which said they would not be showing Rockets games. It wasn’t immediately clear if Morey’s new tweets or the NBA’s statement that followed would be enough to salvage those relationships. Chinese athletic apparel maker Li-Ning released a statement saying it was upset with Morey’s tweet.

“I did not intend my tweet to cause any offense to Rockets fans and friends of mine in China,” Morey tweeted early Monday from Japan, where Houston is playing this week. “I was merely voicing one thought, based on one interpretation, of one complicated event. I have had a lot of opportunity since that tweet to hear and consider other perspectives.

“I have always appreciated the significant support our Chinese fans and sponsors have provided and I would hope that those who are upset will know that offending or misunderstanding them was not my intention. My tweets are my own and in no way represent the Rockets or the NBA.”

NBA Chief Communications Officer Mike Bass said the league recognizes that Morey’s tweet “deeply offended many of our friends and fans in China, which is regrettable.” Bass added that the league supports individuals “sharing their views on matters important to them.”

“We have great respect for the history and culture of China and hope that sports and the NBA can be used as a unifying force to bridge cultural divides and bring people together,” Bass said.

Earlier, Fertitta attempted to distance the team from Morey’s tweet with a Twitter post of his own: “Listen.@darylmorey does NOT speak for the @HoustonRockets. Our presence in Tokyo is all about the promotion of the @NBA internationally and we are NOT a political organization.”

The statements from Morey and the NBA caught the eyes of lawmakers, including no fewer than three U.S. Senators — Ted Cruz of Texas, Rick Scott of Florida (who criticized NBA Commissioner Adam Silver for the league’s statement, apparently unaware it was made by Bass, an NBA spokesman), and Brian Schatz of Hawaii.

“We’re better than this; human rights shouldn’t be for sale & the NBA shouldn’t be assisting Chinese communist censorship,” tweeted Cruz, who said he is a lifelong Rockets fan.

Democratic presidential candidate Julian Castro, a former U.S. Housing Secretary from Texas, tweeted “China is using its economic power to silence critics — even those in the U.S.”

The timing of this is particularly awkward for the NBA. China has teams in the U.S. playing preseason games this week, the Rockets are about to play two games in Japan and the Los Angeles Lakers — with one of the biggest global sports stars in LeBron James — and Brooklyn Nets set to play Thursday in Shanghai and Saturday in Shenzhen, China.

And fostering strong relationships with China has been a priority of the NBA for at least three decades.

The NBA has a China office, just announced plans to add a gaming team in Shanghai to the NBA 2K League, and officials in both countries say as many as 500 million Chinese watched at least one NBA game last season. Several NBA players — including major current and former stars like Stephen Curry and Kobe Bryant — go to China annually to promote their individual brands, and the World Cup held in China this summer saw countless fans attending in NBA jerseys.

The Rockets, largely because of Yao, have an enormous Chinese following. But after Morey’s tweet, even the Chinese government’s consulate office in Houston issued a statement saying it “expressed strong dissatisfaction” with the team.

“We have lodged representations and expressed strong dissatisfaction with the Houston Rockets, and urged the latter to correct the error and take immediate concrete measures to eliminate the adverse impact,” the consulate general’s office said in a statement Sunday.

The Chinese league said Sunday on its official Twitter-like Weibo account that Morey had made “improper remarks regarding Hong Kong” to which it expressed its “strong opposition.”

That underscores Beijing’s extreme sensitivity about foreign attitudes toward the ongoing protests and increasing violence. China accuses foreign parties in the U.S. and elsewhere of encouraging the demonstrations.

The protests that started in June over a now-shelved extradition bill have since snowballed into an anti-China campaign amid anger over what many view as Beijing’s interference in Hong Kong’s autonomy that was granted when the former British colony returned to Chinese rule in 1997.

Protests continued raging this weekend after the shooting of a 14-year-old boy Friday night — the second protest victim of police gunfire — stoked fears of more bloody confrontations. An 18-year-old protester was shot at close range by a riot officer last week. He was charged with rioting and assaulting police, while the younger teen was arrested.

The Communist Party’s official newspaper, People’s Daily, said in a commentary that Morey touched China’s bottom line: “Morey’s position is hurtful to Chinese basketball fans and is also an affront to the Chinese people.” People’s Daily also noted multinational corporations who likewise tested the line on Hong Kong have “paid a heavy price.”