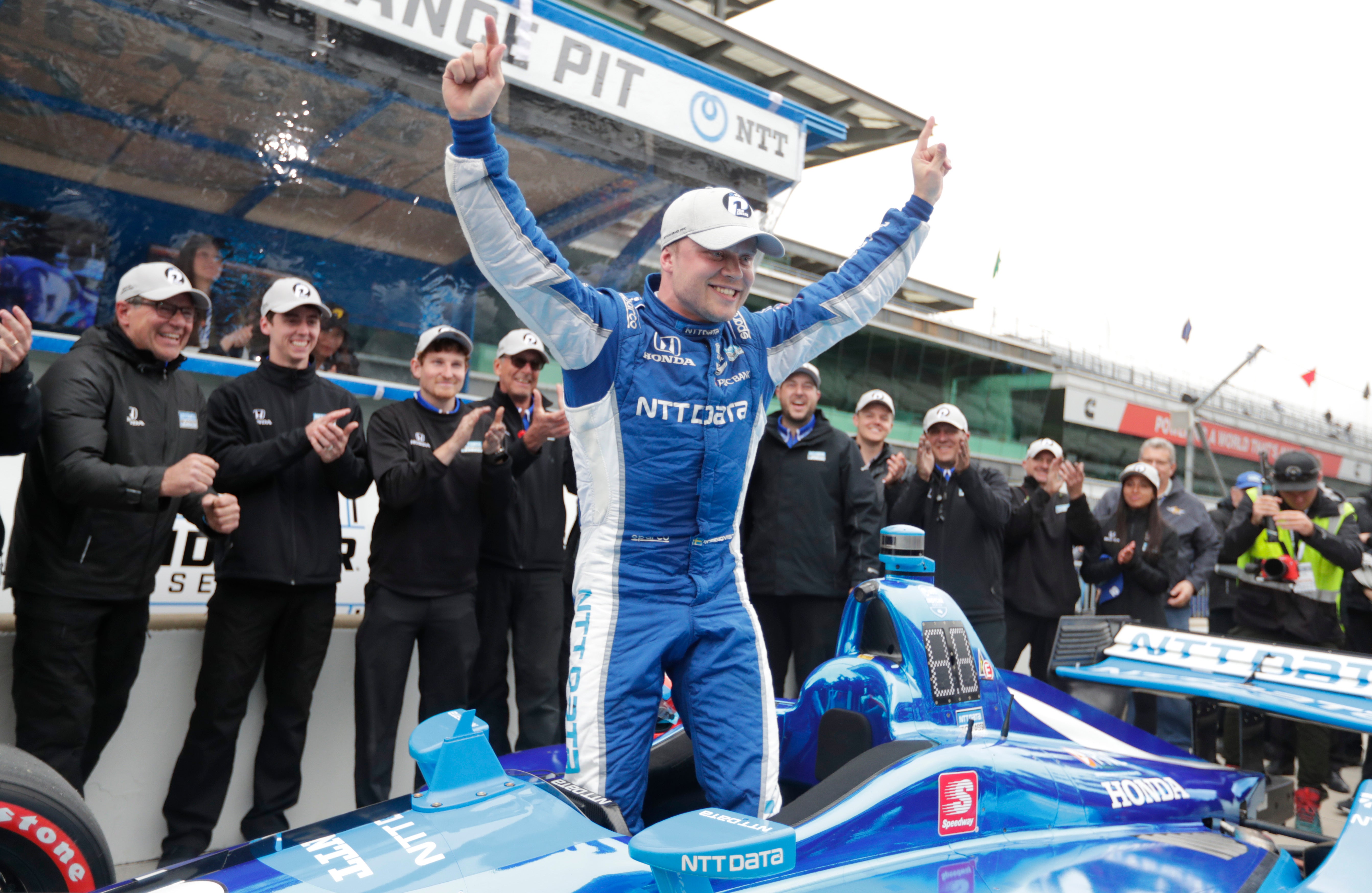 INDIANAPOLIS (AP) — Felix Rosenqvist was fast enough Friday to qualify ahead of teammate Scott Dixon. The Swedish rookie was even good enough to break up Team Penske’s dominance at the IndyCar Grand Prix.

If he does it again Saturday, the 22-year-old Rosenqvist could throw quite a party.

Rosenqvist edged Dixon with a fast lap of 1 minute, 8.2785 seconds to claim his first pole and become the first non-Penske driver since 2014 to earn the No. 1 starting spot. Dixon was second at 1:08.2979 to make it an all-Chip Ganassi Racing front row. Jack Harvey qualified third at 1:08.3238.

“It’s a cool feeling that it happened here,” Rosenqvist said. “My team is based here, obviously, the track has the history it has. Obviously, it’s not the 500 but it’s cool and it’s always a special feeling when you get your first pole in any series and especially in this series where it’s very close.”

Rosenqvist isn’t the only unfamiliar name at the front of the 24-car starting grid.

Harvey, the English driver who runs a partial schedule for Meyer Shank Racing, made the fast six for the first time. Colton Herta, the American rookie who has one win with Harding Steinbrenner Racing, qualified fourth on Indy’s 2.439-mile, 14-turn road course. Ed Jones, the Dubai driver for Ed Carpenter Racing, will start fifth after making his first fast-six.

Meanwhile, defending champion and three-time pole winner Will Power settled for sixth. The Australian is the only Penske driver in the first three rows.

Could it signal a changing of the guard?

“It’s great to see the influx, I think we’ve seen it the last couple of years,” Dixon said, referring to the young drivers. “It’s definitely what we need and it’s definitely keeping the veterans pretty honest.”

The biggest challenge Friday was warming up the tires on a chilly, breezy day at the speedway.

But if Rosenqvist can deal with the expected rain Saturday, he could add another line to a resume that already includes three top-10 finishes this season.

“If it’s a full green race, he’s going to have a great chance to win,” Power said. “If you start at the front and it’s an all green race, these days you’re in a great spot because no one makes mistakes anymore.”

After winning at Texas, Herta finished 24th and 23rd in the next two races.

But he rebounded with a near record-breaking performance during the second round of qualifying. While Herta was the only driver in qualifications to go under 1:08, he finished second among the rookies.

“I know there was a battle between me and him as to who was going to be the first rookie to get on the pole (this year),” Hera said. “He got that.”

Michael Andretti’s team has four drivers competing on the road course — and none advanced to the second round of qualifying.

It also was a tough day for Indianapolis 500 winners.

Rossi, the 2016 champion, Hunter-Reay, the 2014 winner and two Brazilian winners — Helio Castroneves and Tony Kanaan — were all eliminated in the first round. Japan’s Takuma Sato, winner of the 500 in 2017, was knocked out in the second round and Power, the defending 500 champ, wound up last in the final group.

Team Penske’s four-year winning streak is in grave danger with only Power in the first three rows and he had to eliminate teammate Josef Newgarden, the points leader, late in the first round just to reach the second round.

Here are Friday’s qualifying results for the IndyCar Grand Prix.

The race on the 2.439-mile Indianapolis Motor Speedway road course will begin at 3:50 p.m. Saturday. A full day of events is scheduled at the track.

First Pole Position in @IndyCar ? One of the toughest qualifyings in a while, which makes is even better to come out first! Big congrats to @CGRTeams for locking out the front row and huuuge thanks to @HondaRacing_HPD @NTTDATAServices ?? Excited for tomorrow ?? pic.twitter.com/hfUR3ZGbjV — Felix Rosenqvist (@FRosenqvist) May 11, 2019