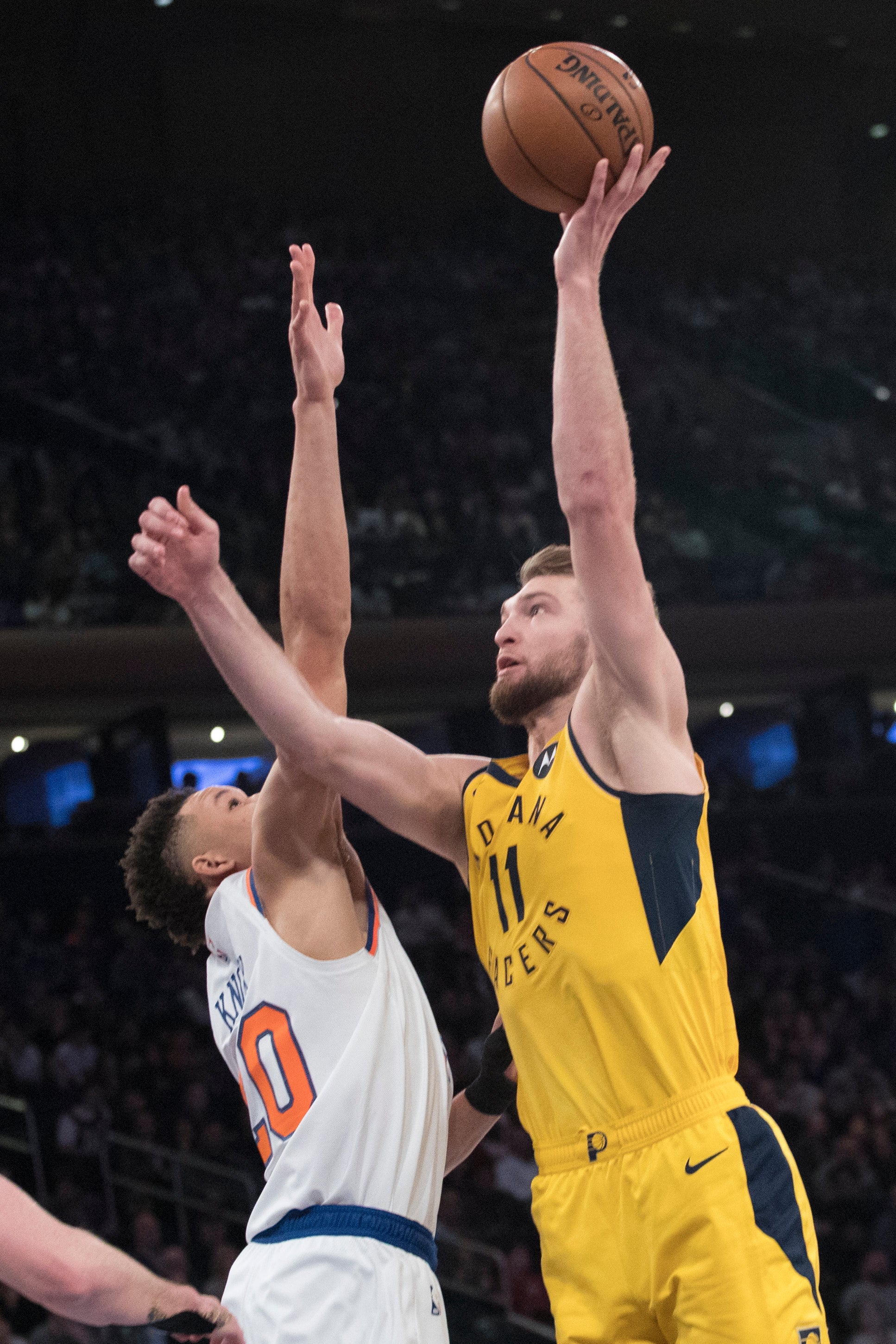 NEW YORK (AP) — Domantas Sabonis had 22 points and 15 rebounds to cap his sizzling season at Madison Square Garden, and the Indiana Pacers easily bounced back from their worst performance of 2018-19 by beating the New York Knicks 121-106 on Friday night.

Sabonis shot 9 for 14 from the field to finish 21 of 26 this season in two games in New York. He made all 12 shots and tied his career high with 30 points when the Pacers won here on Halloween.

Starting this time with Myles Turner out of the lineup, he led six players in double figures as Indiana shot 52 percent.

Victor Oladipo added 19 points for the Pacers, who finished 3-2 on their longest road trip of the season. They were beaten badly in Boston on Wednesday, yielding season highs of 135 points and 56.8 percent shooting in their 27-point loss.

They came out either with more energy or anger Friday. Oladipo threw down a dunk over Mario Hezonja, and Sabonis and Bojan Bogdanovic both had powerful slams in the first half.

Emmanuel Mudiay scored 21 points for the Knicks, back from a lengthy, six-game road trip and playing their first game at Madison Square Garden since Christmas. They lost their seventh straight at home.

The Pacers led much of the first half and were ahead by 13 points early in the second quarter. New York battled back to take the lead on Tim Hardaway Jr.’s second straight 3-pointer, but with the game tied, Indiana scored the final 12 points, with Oladipo hitting consecutive 3-pointers, to make it 64-52 at halftime.

Indiana then controlled the early stages of the third quarter, with Bogdanovic opening and closing a 16-7 spurt out of the locker room to open an 80-59 cushion.

Pacers: Turner has a sore right shoulder. … The Pacers have won the last five meetings. … Indiana now plays five straight and six of its next seven at home.

Knicks: New York played without Enes Kanter (illness), Frank Ntilikina (sprained left ankle) and Mitchell Robinson (sprained left ankle). … Kevin Knox was presented with the Eastern Conference rookie of the month award for December before the game. … The Knicks celebrated Croatian heritage night. Hezonja and Bogdanovic are Croatian, with Bogdanovic the leading scorer in the 2016 Olympics with 25.3 points per game.

Knicks coach David Fizdale said the team is leaning toward leaving Kristaps Porzingis home next week when the Knicks travel to London to play Washington, believing that is better for the All-Star forward’s rehabilitation from his torn ACL than traveling. Fizdale said he spoke Friday with Porzingis, who is scheduled to be re-evaluated in about a month. He said Porzingis’ spirits were positive.

“Obviously he misses playing, that part has been hard,” Fizdale said, “but he’s starting to get stronger, so he’s feeling better. And he seems to be in a really good place.”

Kanter posted a video of his “cheat day” meal on Wednesday, with seven burgers and a plate of fries on the table in front of him. He then missed practice Thursday and the game Friday because of illness, leading to speculation that he had ate himself sick. But Fizdale thought there was no way Kanter actually ate all that food.

“The guy walks around with his shirt off all day in the locker room. There’s no way he’s stuffing seven burgers down his face. I just don’t see that,” Fizdale said. “I think sometimes people take the ‘gram too seriously.”