Schiff: Trump ‘vindictive’ and Trump’s tweet was intended to intimidate 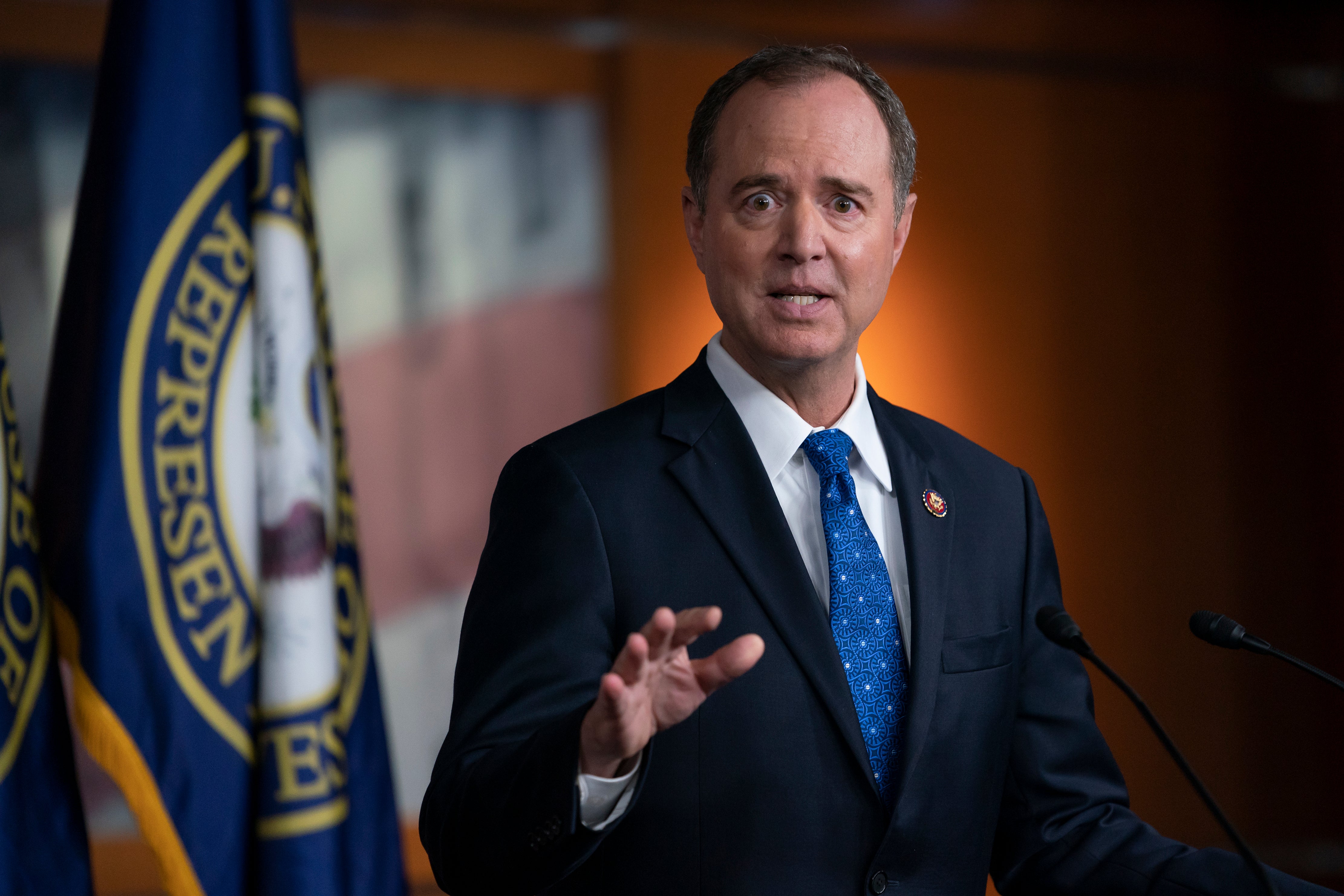 House Intelligence Committee Chairman Adam Schiff, D-Calif., talks to reporters about the release by the White House of a transcript of a call between President Donald Trump and Ukrainian President Voldymyr Zelenskiy, in which Trump is said to have pushed for Ukraine to investigate former Vice President Joe Biden and his family, at the Capitol in Washington, Wednesday, Sept. 25, 2019. House Speaker Nancy Pelosi, D-Calif., and the Democrats are now launching a formal impeachment inquiry against President Donald Trump. Rep. Schiff characterized Trump's words saying, "this is how a mafia boss talks." (AP Photo/J. Scott Applewhite)
by: Chandelis Duster and Kristen Holmes, CNN
Posted: Jan 26, 2020 / 12:32 PM EST / Updated: Jan 26, 2020 / 12:32 PM EST

(CNN) — Lead House impeachment manager Rep. Adam Schiff on Sunday called President Donald Trump “wrathful and vindictive,” adding that he thought a morning tweet by the President was intended to intimidate him.

During an appearance on NBC’s “Meet the Press,” Schiff was asked if he viewed Trump’s tweet that “he has not paid the price, yet, for what he has done to our Country!” as a threat. Schiff responded, “I think it’s intended to be.” Trump’s Twitter attack on Schiff was one of several the President launched online Sunday against Democrats and his Senate impeachment trial.

Later Sunday, Trump — who often tweets and retweets attacks on people he feels have wronged him — also insulted “Meet the Press” host Chuck Todd who conducted the earlier interview with Schiff.

Democrats and Schiff accused Trump of “witness intimidation” during the House impeachment hearings over his tweets attacking former US Ambassador to Ukraine Marie Yovanovitch and Jennifer Williams, an aide to Vice President Mike Pence.

White House press secretary Stephanie Grisham on Sunday admonished the public for putting “meaning behind” what the President says and said Trump was not threatening Schiff.

“I think that people, and this has been a theme actually throughout this process, people put meanings behind what he says,” Grisham said in an interview on Fox News. “The President speaks in a very unique way, he’s a counterpuncher, he’s saying what it’s on his mind.”

In concluding the House’s opening argument Friday evening, Schiff, a California Democrat and the chairman of the House Intelligence Committee, delivered a lengthy argument for removing the President from office on the charges of abuse of power and obstruction of Congress.

In his “Meet the Press” interview,Schiff defended his citation of a CBS News report that said Republican senators had been told “your head will be on a pike” if they vote against the President. Schiff’s comment, made during the final day of his team’s opening arguments, sparked an audible reaction from Republican senators in the chamber — a reaction some Democrats have dismissed as faux outrage.

Oklahoma Republican Sen. James Lankford criticized Schiff for quoting the report, telling CNN’s Jake Tapper on “State of the Union” that he and other senators were offended by it.

“The offensive part is there is he was saying that the President had communicated to us that our heads will be on a pike if we oppose him, and all of us looked at each other and we have heard no such comment from the President,” Lankford said.

Schiff told Todd that he was making an argument that it is going to be very difficult for senators to stand up to Trump.

“And I think I have to be very candid about this … I made the argument that it’s going to require moral courage to stand up to this President,” he said. “And this is a wrathful and vindictive President. I don’t think there’s any doubt about it and if you think there is, look at the President’s tweets about me today, saying that I should pay a price.”

‘I think it was a huge mistake’

Asked about his reaction to Trump’s legal team’s first day of opening arguments in the impeachment trial Saturday, Schiff said he believed the President’s team was “afraid of what witnesses have to say,” therefore the White House’s entire trial strategy has been to “deprive the public of a fair trial” — reiterating yet again that a fair trial requires witnesses.

Trump’s legal team, he said, “basically acknowledged the scheme” — and that its main argument was “you don’t need a fair trial here,” adding that there was no “exoneration” if the country was deprived of a fair trial.

Schiff also said he thought it was a “huge mistake” that Trump’s lawyers repeated a debunked conspiracy theory that Ukraine meddled in the 2016 US presidential election.

“I was surprised. I think it was a huge mistake… they go and double down on that same crazy conspiracy theory that Ukraine hacked the DNC server. It’s astonishing,” Schiff said. “On the first day of the President’s defense, to say that the President should disbelieve his own intelligence agencies, has every right to believe (Russian President) Vladimir Putin. I wouldn’t want to make that argument.”

The President’s personal attorney Jay Sekulow has signaled that the defense team is likely to go after former Vice President Joe Biden and his son Hunter Biden, as well as the Russia investigation into the President and the opposition research dossier from ex-British intelligence agent Christopher Steele.

The President’s team is delivering its presentation as White House and Senate GOP sources have told CNN they are confident they will defeat a vote next week for additional witnesses that would extend the trial. But there were no mentions of the former vice president or his son Saturday.

Schiff, asked about a possible deal where Democrats and Republicans would both call the witnesses they want in order to have trial testimony, said he believes the President “has the right to call relevant witnesses…in his defense,” but he made clear he did not believe that Hunter Biden is a “relevant witness.”

“If we’re talking about a fair trial…. (Senators) can’t say, ‘Well, we’re going to allow the President to trade witnesses that don’t shed any light on the facts, but would allow him to once again try to smear his opponent,” Schiff said.