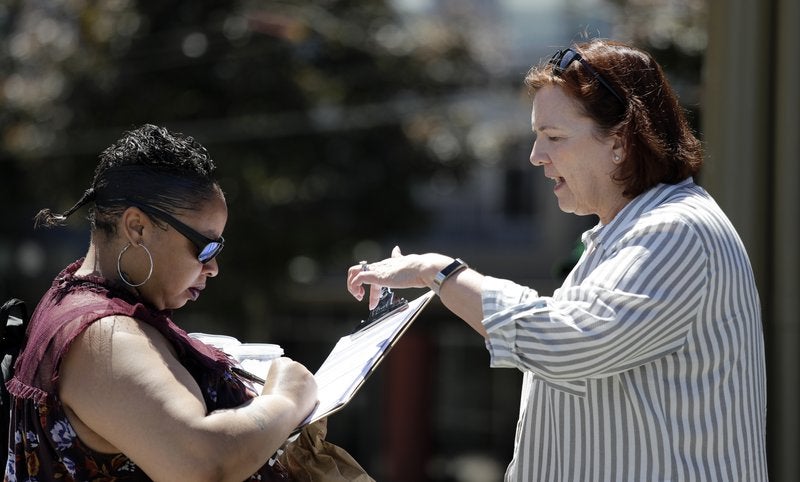 It’s a tradition for political hopefuls. And for Murakami, a two-time council contender, it’s also her main fundraising strategy, thanks to a first-of-its-kind program allowing Seattle voters to give candidates taxpayer money to fuel their campaigns.

“I would have been a complete non-contender without the program,” she said of her first race in 2017, when she beat six other primary candidates before losing the general election.

Now entering its second election, Seattle’s voter voucher-based campaign financing program is drawing national attention with support from Sen. Kirsten Gillibrand, a Democrat from New York and presidential contender who proposes duplicating it at the federal level. It’s one of at least eight public campaign finance programs enacted by city and county governments around the U.S. since 2015.

Under the system, the city mails each voter four $25 “Democracy Vouchers” that they can give to City Council or city attorney candidates, split among different candidates, or choose not to donate. Voucher money not used by voters remains in city coffers.

Candidates took in $1.1 million during the program’s first round in the 2017 election.

Supporters say the program draws in candidates who otherwise would not consider running and forces politicians to pay attention to smaller donors. The city’s 2017 City Council race featured 15 primary candidates, with three-quarters applying for the vouchers and nearly half saying they would not have run without them, according to a report commissioned by the city.

This year, 72 candidates registered to compete for seven seats, making the race by several measures the most competitive in more than 15 years.

“It gives candidates the chance to say, ‘I’m going to raise my money by speaking to my constituents,’ rather than dialing for dollars to big out of state donors,” said Ian Vandewalker, a campaign finance expert with the Brennan Center for Justice at New York University.

Gillibrand has said a federal campaign financing system modeled on the Seattle program could distribute $200 per voter in what she called “Democracy Dollars” so voters could individually finance presidential and congressional races.

Statistics show that the popularity of the program is on the rise, with Seattle candidates receiving about 61,000 vouchers worth $1.5 million through May, ahead of the November general election. That’s up from 13,841 vouchers totaling $346,000 over the same period in 2017.

Voter engagement also appears to have increased because of the program. Seattle residents who voted in less than half of the city’s elections before 2017 were found to be four times more likely to vote that year if they used their vouchers, according to a University of Washington study.

Still, the program has seen some speedbumps. Its first year didn’t yield a dramatic increase in donor diversity, with participation highest among older voters and in majority-white neighborhoods.

The program also stumbled in accessibility. Roughly half the candidates who said they wanted to use the vouchers didn’t make it through the qualification process, and others ran into delays getting the money in time to compete.

The city said it has since taken steps to address diversity and accessibility.

Meanwhile, the Pacific Legal Foundation, a libertarian-leaning group, has sued to halt the program on behalf of two Seattle residents. The program is funded by a special property tax, and the lawsuit says it’s a violation of taxpayers’ rights to use the money to fund candidates they may not support.

And even advocates who back campaign finance reform more broadly say translating the Seattle program to the national stage raises unanswered questions.

Scaling a municipal voter campaign finance system to the federal level would be a challenge, Vandewalker said, and a voucher program would likely require more administrative work and be generally more complicated than other more popular public finance models, like funds-matching programs.

In Seattle, the 2017 program cost about $1 million in administrative costs alone, before a single voucher was even turned in.

Still, in Seattle, it’s the difference between running and not running for candidates like Murakami, who during her unsuccessful 2017 campaign collected almost 90% of her $172,000 in funding from the vouchers and without it said she “never would have attempted to run.”

Shaun Scott, 34 , who’s running for City Council, said in an interview the program gives him room to talk about policies that might be unpopular with wealthy political donors, like costly environmental reforms known as a “Green New Deal,” partially funded by a tax on high earners. He’s collected more than $50,000 through the voucher program so far.

“I’m a Black working-class Millennial candidate with a net worth of approximately $10,000,” Scott wrote separately on Twitter. “If it weren’t for the democracy voucher program, running for office would be a pipe dream.”