Second day of protests as Venezuelans vie to tip balance 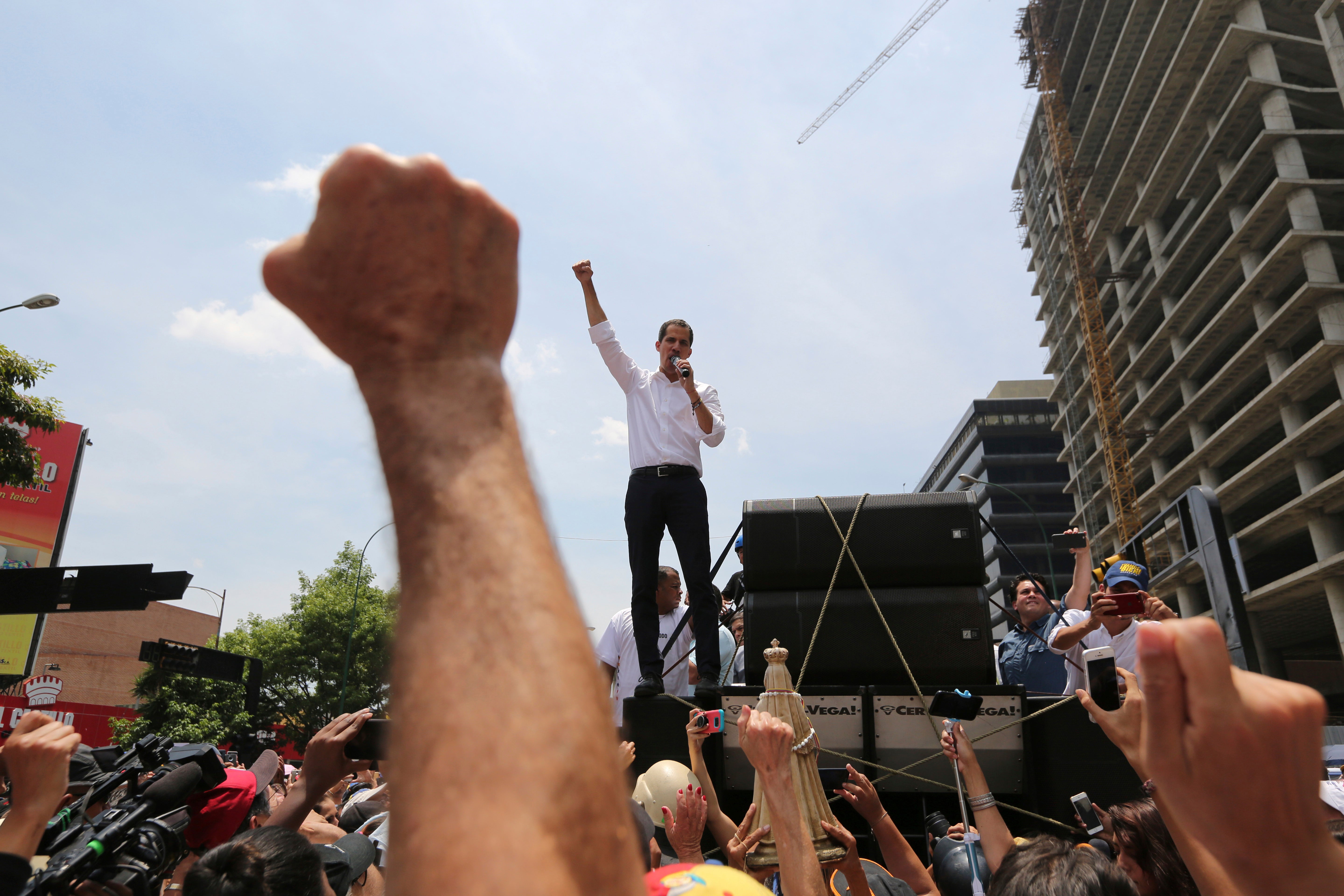 CARACAS, Venezuela (AP) — Wary Venezuelans emerged on the streets of the nation’s capital Wednesday waving their nation’s tricolor flag and banging pots and pans, hoping to drum up momentum after opposition leader Juan Guaidó’s bold attempt to spark a military uprising that has thus far failed to tilt the balance of power.

Thousands gathered to demand President Nicolas Maduro’s ouster in what could be another critical day in the nation’s struggle between Maduro’s widely detested socialist government and Guaidó’s opposition movement, backed by powerful allies like the United States but unable to secure the loyalty of key factions, including the military.

The dramatic events that led to violent clashes Tuesday between protesters and troops loyal to the embattled president seemed to indicate that there was no quick end in sight to the nation’s protracted power struggle. Guaidó’s plans largely appeared to have floundered as high-ranking defections failed to materialize.

“I don’t want to say it was a disaster, but it’s wasn’t a success,” Marilina Carillo, 54, said, standing in a crowd of people blowing horns and whistles.

As the protests got underway Wednesday, security forces launched tear gas at a small group of protesters in the western Caracas neighborhood of El Paraiso. National guardsmen dismounted from motorcycles to disperse the crowd, firing rubber bullets. Demonstrators, some covering their faces against the tear gas fumes, grabbed the gas canisters and tossed them back.

“Assassins!” one woman cried out.

Guaido, speaking before a thick crowd of supporters elsewhere in the capital, urged Venezuelans to remain on the streets and begin taking steps toward a general strike to ramp up pressure on Maduro.

“It’s totally clear now the usurper has lost,” he declared, despite the lack of mass military defections.

The upheaval marks the most serious challenge yet to Maduro’s rule, though he has succeeded in keeping his grip on power. While he may be weakened as cracks within his inner circle begin to emerge — the director of the feared SEBIN intelligence agency broke with Maduro on Tuesday — he could also escape from the latest threat to his contested rule more empowered.

A defiant Maduro, who had been absent throughout most of Tuesday, emerged on state television late at night surrounded by his closest advisers and blasting Guiadó’s move as a U.S.-backed coup attempt.

“This cannot go unpunished,” he said.

The bold and risky move by the 35-year-old Guaidó, who is recognized by over 50 nations as Venezuela’s rightful president, is likely to force Maduro to make a decision on whether to let his adversary remain a free man.

“Failing to arrest Mr. Guaidó would be perceived as an important sign for weakness from Mr. Maduro,” Morelli said. “But arresting Mr. Guaidó risks a strong counter-reaction from the U.S.,” which has been ratcheting up sanctions.

Maduro supporters were also called to rally Wednesday in another round of dueling protests between both sides. Government workers wearing the socialist party’s red waited to be bused from state offices to a rally at the presidential palace. While Maduro maintains a devout core of fervent supporters first inspired by his late predecessor, Hugo Chavez, attendance at such shows of support is viewed as a requirement of their jobs.

David Smilde, a Venezuela expert, said the opposition’s so far unsuccessful attempt to trigger an uprising should provoke a round of reflection.

“It is clear the pressure-collapse scenario they have been working with has run its course,” he said. “Given the balance of power within Venezuela and the geopolitical struggle around it, they need to engage in real politics and real negotiations to move this conflict to a different place.”

Tuesday’s turmoil began with the dawn release of a video Guaidó shot near the Carlota air base. In a surprise, Leopoldo Lopez, Guaidó’s political mentor and the nation’s most prominent opposition activist, stood alongside him. Detained in 2014 for leading a previous round of anti-government unrest, Lopez said he had been released from house arrest by security forces following an order from Guaidó.

However, by late Tuesday Lopez and his family had sought refuge in the Chilean ambassador’s residence and later moved to the Spanish Embassy.

Amid the unrest, Maduro’s military commanders went on state television to proclaim their loyalty. But in a possible sign that Maduro’s inner circle could be fracturing, the head of Venezuela’s intelligence agency wrote an open letter breaking ranks.

Manuel Ricardo Cristopher Figuera said he had always been loyal to Maduro but it was now time to “rebuild the country.” He said corruption has become so rampant that “many high-ranking public servants practice it like a sport.”

“The hour has arrived for us to look for other ways of doing politics,” Figuera wrote.

Still, like past attempts to oust Maduro, the opposition seemed outmaneuvered Tuesday. The hoped for split in the military didn’t emerge and a plane that the United States claimed was standing by to ferry Maduro into exile never took off.

U.S. National Security Adviser John Bolton said Wednesday that Maduro was surrounded by “scorpions in a bottle” and it was only a matter of time before he leaves power.

He said key figures in Maduro’s leadership, including the defense minister and head of the presidential guard, had been “outed” as dealing with the opposition.

Maduro can’t trust his defense minister any longer, Maduro claimed, adding that the beleaguered leader spent most of Tuesday at a military prison in Caracas that the U.S. says is a key Cuban command post “because he doubted the loyalty of the Venezuelan armed forces.”

Johanns Davila, 61, walked his dog through a street in Venezuela’s capital early Wednesday that was littered with shotgun shells, tear gas canisters and a charred motorcycle where skirmishes between the opposition and state security broke out the day before.

He said that despite the turmoil he was encouraged by the opposition’s bold moves and would join them in Wednesday’s protest.

“We need to get people out,” he said, “and recover the country.”