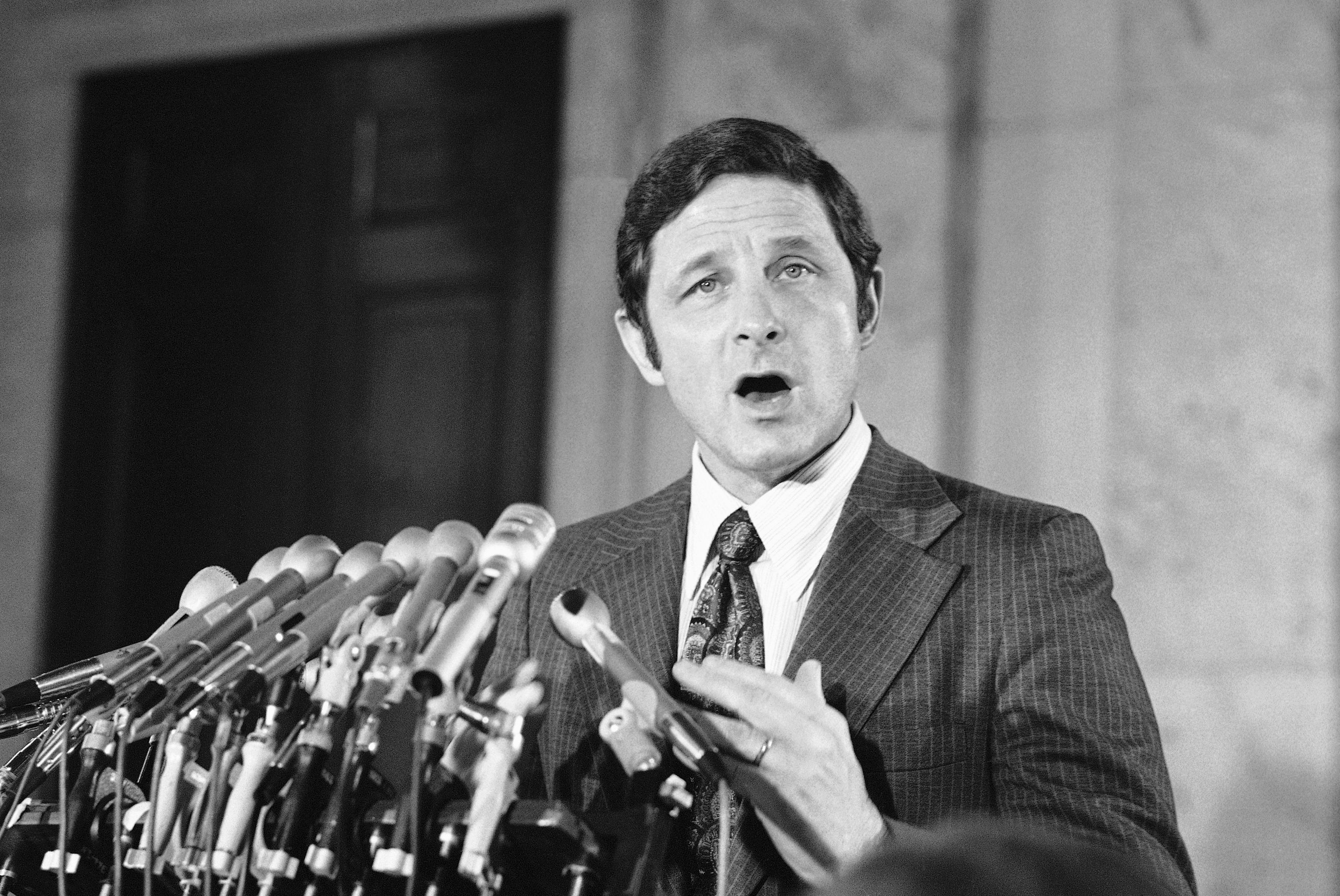 INDIANAPOLIS (AP) — When Birch Bayh pushed in the U.S. Senate for the landmark 1972 federal law banning discrimination against women in college admissions and athletics, women received fewer than 10 percent of all medical and law degrees and only one in 27 high school girls played sports.

Now, women make up more than half of those receiving bachelor’s and graduate degrees and more than 3 million high school girls — one in two — play sports.

Bayh reveled in the impact of the Title IX law in the years after his time as a Democratic senator from Indiana ended. He described the Title IX law as the most important legal step for equality since the right of women to vote was guaranteed in 1920.

“There was a soccer field I used to jog around,” he said in a 2002 interview. “One day, all of a sudden, I realized that half of the players were little girls and half of them were little boys. I realized then that that was, in part, because of Title IX.”

Bayh also sponsored a constitutional amendment lowering the voting age to 18 amid protests over the Vietnam War. Another amendment he sponsored allowed the replacement of vice presidents.

But it was his work to pass the landmark Title IX law that helped solidify his legacy before his death Thursday at age 91.

Tennis great Billie Jean King, who worked with Bayh on women’s rights issues, released a statement with his family Thursday saying the former senator was “one of the most important Americans of the 20th century.”

“You simply cannot look at the evolution of equality in our nation without acknowledging the contributions and the commitment Senator Bayh made to securing equal rights and opportunities for every American,” King said.

His family released a statement saying Bayh died from pneumonia while surrounded by his family at his home in Easton, Maryland. His son Evan followed him into politics and became Indiana’s governor and also a senator.

The elder Bayh, a liberal Democrat, had a back-slapping, humorous campaigning style that helped him win three narrow elections to the Senate starting in 1962 at a time when Republicans won Indiana in four of the five presidential elections. Bayh’s hold on the seat ended with a loss to Dan Quayle during the 1980 Ronald Reagan-led Republican landslide.

Bayh was the lead sponsor of the law prohibiting gender discrimination in education — known as Title IX for its section in the Higher Education Act. Bayh said the law was aimed at giving women a better shot at higher-paying jobs.

“It was clear that the greatest danger or damage being done to women was the inequality of higher education,” Bayh once said. “If you give a person an education, whether it’s a boy or girl, young woman or young man, they will have the tools necessary to make a life for families and themselves.”

As the Title IX law reached its 40th anniversary, North Carolina State athletic director Debbie Yow called it one of the most important pieces of civil rights legislation in the country’s history.

“Had it not passed, the options and opportunities for women in this country and the world would be vastly different,” Yow said.

Bayh used his position as head of the Senate’s constitutional subcommittee to craft the 25th Amendment on presidential succession and the 26th Amendment setting the national voting age at 18.

The issue of presidential succession was fresh when Congress approved the amendment in 1967. The vice presidency had gone vacant for more than a year after President John F. Kennedy’s assassination because there was no provision for filling the office between elections.

The amendment led to the presidency of Gerald Ford less than a decade later when Ford first succeeded Spiro Agnew as vice president and then took over the White House after President Richard Nixon’s resignation during the Watergate scandal.

Bayh’s push to lower the national voting age from 21 to 18 came amid protests over the Vietnam War and objections that Americans dying on battlefields were unable to vote in all states. The amendment won ratification from the states in 1971.

Bayh also was a leading sponsor of the Equal Rights Amendment, which would have barred discrimination on the basis of gender. It passed Congress but failed to win approval from two-thirds of the states by its 1982 deadline.

Bayh had begun preparing to make a run for the 1972 Democratic presidential nomination when his wife, Marvella, was diagnosed with breast cancer. He dropped that campaign but entered the 1976 presidential campaign, finishing second to Jimmy Carter in the opening Iowa caucuses but then faring poorly in later primaries.

Marvella Bayh gained attention by speaking and making television appearances around the country promoting cancer detection and encouraging research. But her cancer later returned, and she died in April 1979 at age 46 — shortly before her memoir recounting her health fight was published.

Bayh sought a fourth Senate term the following year — with 24-year-old son Evan as campaign manager — but lost to Quayle, who was then a two-term congressman.

Born Jan. 22, 1928, in Terre Haute, Indiana, Birch Evans Bayh Jr. moved to his maternal grandparents’ farm at the nearby community of Shirkieville after his mother’s 1940 death and his father’s entry into World War II military service.

He graduated from Purdue University’s School of Agriculture after spending two years in the Army and met his future wife during a 1951 National Farm Bureau speaking contest in Chicago, which she won as an entrant from Oklahoma. They soon married and moved to the Shirkieville farm.

Bayh won his first election to the state Legislature in 1954, and son Evan was born the following year. Bayh rose quickly in politics, becoming the Indiana House speaker in 1959 at the age of 30. He earned a law degree from Indiana University, completing law school while serving in the Legislature.

Bayh entered the 1962 Senate race, taking on three-term Republican Sen. Homer Capehart. Bayh boosted his name recognition — and correct pronunciation — around the state with a catchy campaign song opening with the lines “Hey look him over, he’s my kind of guy. His first name is Birch, his last name is Bayh.”

Bayh was 34 when elected to the Senate and soon became friends with the only senator younger than him — Massachusetts Sen. Edward Kennedy.

Bayh and his wife were flying with Kennedy when their small plane crashed near Springfield, Massachusetts, in June 1964. The pilot and a legislative aide were killed, but Bayh pulled Kennedy, who suffered a broken back and other serious injuries, from the wreckage.

After leaving the Senate, Bayh worked as a lawyer and lobbyist in Washington. He remarried in 1982, and he and second wife, Katherine “Kitty” Helpin, had a son, Christopher, who is now a lawyer in Washington.

Bayh largely stayed in the background of Indiana politics as his older son, Evan, was elected to the first of his two terms as governor in 1988. The younger Bayh built a more moderate image than his father, ending his eight years as governor with high approval rating and then winning his first of two elections to the Senate in 1998.

He didn’t seek a third term in 2010, saying the Senate had become too partisan. Evan Bayh launched an unexpected comeback bid in 2016 for the Senate, but he lost to Republican Todd Young.

Along with his wife and two sons, Bayh is survived by four grandchildren, according to his family.

Associated Press writer Rick Callahan contributed to the above report from Indianapolis.

“When I was a teenager, my father took a job in Washington, D.C., so he left us for a year, and I remember thinking, ‘What possibly could be more important than him staying at home?’ Us, you know, one of four kids, and now I get it.”

Pfaff said, “As a matter of fact, when his son Evan announced he was running for governor, I got to take the day off from school got in the old station wagon and drove out to Shirkieville, which is my district. It is out in West Terre Haute, and I watch him, and his father was there. I remember thinking, ‘Uh, this is politics?”

In 1964 when a plane carrying U.S. Sens. Ted Kennedy and Birch Bayh to the Massachusetts Democrat Convention crashed, two people on the plane died. Bayh was credited with pulling Kennedy from the wreckage.

Indiana Gov. Eric Holcomb has ordered flags lowered to half-staff and, according to the Star Democrat in Maryland, a memorial gathering will occur from 6 to 8 p.m. Friday at Helfenbein & Newnam Funeral Home in Easton, Maryland.