Senate hearings to get underway on Trump Supreme Court pick 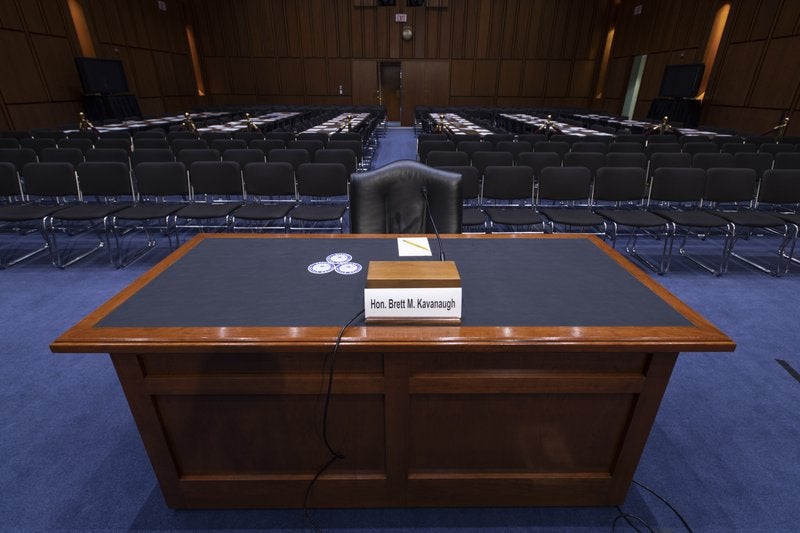 WASHINGTON (AP) — With Republicans hoping to move the Supreme Court to the right for years to come, a Senate committee is beginning hearings for President Donald Trump’s second nominee to the court.

Judge Brett Kavanaugh, 53, has served for the past 12 years on the appeals court in Washington, D.C., which is considered the second most important court in the country after the Supreme Court. He has a solidly conservative record, including a dissenting opinion last year that would have denied immediate access to an abortion for an immigrant teenager in federal custody.

As a young lawyer, Kavanaugh worked for Justice Anthony Kennedy, the man he would replace on the high court. Kennedy retired at the end of July. Trump’s first nominee, Justice Neil Gorsuch, also was a Kennedy law clerk the same year as Kavanaugh.

The first day of the Senate Judiciary Committee hearings Tuesday will feature opening statements from senators and Kavanaugh himself. His remarks are not likely to be released in advance, but nominees often sing the praises of judicial independence. When he was sworn in as an appellate judge in 2006, Kavanaugh called an independent judiciary “the crown jewel of our constitutional democracy.”

Questioning will begin on Wednesday, and votes in committee and on the Senate floor could occur later in September. If all goes as Republicans plan, Kavanaugh could be on the bench when the court begins its new term on Oct. 1.

Sen. Chuck Grassley, the Iowa Republican who is the committee chairman, has called Kavanaugh “one of the most qualified nominees ever picked for the court.” The American Bar Association has given Kavanaugh its highest rating, well qualified.

Rebuffed in their request to delay the hearing, Democrats are planning to shine a light on Kavanaugh’s views on abortion, executive power and whether Trump could be forced to testify as part of special counsel Robert Mueller’s Russia investigation.

“I remain troubled by your view of executive power,” Democratic Sen. Chris Coons of Delaware, a committee member, wrote Friday in an open letter to Kavanaugh. “I am not satisfied with your responses to me during our private meeting, and I believe that you owe the Committee and the American people more thorough, candid answers during your hearing next week.”

Many Democratic senators already have announced their intention to vote against Kavanaugh and many Republicans have likewise signaled their support. A handful of Democrats seeking re-election in states Trump carried in 2016 could vote for Kavanaugh.

If no Democrat ultimately supports the nomination, the Republicans have no margin for error in a Senate they control by 50-49. Sens. Susan Collins of Maine and Lisa Murkowski of Alaska are the only two Republicans even remotely open to voting against Kavanaugh, though neither has said she would do so. Abortion rights supporters are trying to appeal to those senators by focusing on concerns that Kavanaugh could vote to limit abortion rights or even overturn the landmark Roe v. Wade ruling from 1973 that first established a woman’s constitutional right to an abortion.

Democrats have been under intense pressure from liberal voters to resist Trump, and many remain irate, even two years later, over the treatment of Merrick Garland, President Barack Obama’s nominee for the Supreme Court, who was denied so much as a hearing last year by Majority Leader Mitch McConnell.

But Democrats are powerless to delay a vote on Kavanaugh since McConnell led Republicans, during the Gorsuch nomination, in eliminating the 60-vote filibuster threshold that had been in place for Supreme Court nominations.

The filibuster rule required 60 of the 100 votes to advance a bill or nomination, in contrast to the simple 51-vote majority that applies in most cases.