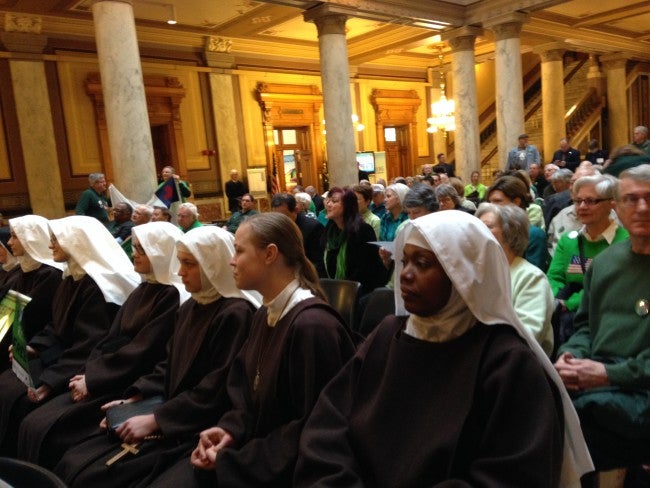 “Religious people are scared. And you as legislators need to know that,” said Rev. Tim Overton of Muncie, echoing others who expressed concern.

“This bill acts as a shield and not a sword,” said Schneider during the hearing. “It is a protector for those who want to practice religious freedom.”

18 other states have similar laws. But critics argue the proposal could open the door to discrimination.

This is unnecessary legislation with a host of potential unintended consequences,” said Jane Henegar, Director of the ACLU of Indiana.

Those opposed to the bill are concerned it would allow allow businesses and churches to deny services to some people like same-sex couples based on their religious beliefs.

Supporters of the bill packed the statehouse before the hearing for a rally.

“Faith must be expressed, it must be acted upon, it must be lived in the public square,” said Fr. David Mary-Engo to the crowd.

According to Advance America, the bill would help protect individuals, Christian businesses and churches from those supporting homosexual marriages.

Governor Mike Pence was among those to speak in favor of the bill at the gathering.

But opponents say it’s not an issue of religious freedom at all, and that the bill does not represent all religious people.

“We represent the Jewish community, which of course is a religious minority community here in Indiana,” said David Sklar of the Indianapolis Jewish Community Relations Council. “We feel perfectly comfortable that our religious liberties and our freedom of religion are already protected here in the state.”

The Indiana Chamber of Commerce issued a statement Monday night in opposition to the proposal.

“We believe religious freedom for individual employees is already protected through existing laws,” said CEO Kevin Brinegar. “From the employer perspective, the greatest concern is the potential for lawsuits. It puts employers in the difficult position of determining the legitimacy of an employee’s religious belief claims. That’s not something employers want or should have to do because it would subject them to unwarranted, costly and time-consuming litigation.”

The committee chairman says a vote on the proposal won’t take place until a future meeting.