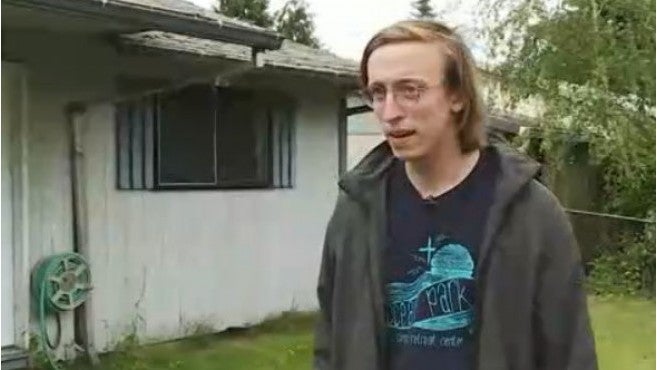 VANCOUVER, Wash. (KOIN) — A senior at Heritage High School in Vancouver is being barred from walking at graduation after he spoke out about claims of bullying and sexual assault at the school.

Charles Chandler said Thursday that school officials are punishing him after he gave a speech at a so-called “Moving Up” assembly on Wednesday.

Video of the speech shows Charles wearing his cap and gown while standing at a podium with a microphone. Students are seen scattered among the bleachers in the background.

“Through the years of high school, you will realize you can only count on yourself,” he says. “You will get made fun of. You will walk through these halls and get called ‘stupid,’ ‘ugly,’ an ‘idiot,’ a ‘piece of crap’ and so many, many more insults.”

“To you underclassmen who have to endure the things the school throws at you for 2 or 3 more years, a school where the administration closes their eyes to everything that happens in the school; the sexual assault, the bullying, the depression, the outcasts — and they do nothing to fix it. They just cast it aside like it’s nothing, or if they do take notice they take the side of the accused and not the victim. And I feel sorry for you.”

The speech ends shortly after that statement, to cheers and applause.

Charles told KOIN 6 News he gave the speech to let those who have been bullied or treated inappropriately at the school know that their voices matter. He said students have told him stories of being bullied and groped at the school.

He said the students who told him those stories said they feel like they haven’t been heard by school leaders and the situation hasn’t improved.

According to Charles, the school district didn’t like what he had to say. He said he was told by staff members that he deviated from the comments he was approved to make at the assembly.

Following his speech, Charles was barred from walking at graduation on Saturday. He said the decision feels like punishment for bringing light to a serious problem.

“Yesterday, during our traditional “Moving Up” assembly, a student speaker departed from his pre-approved comments.  He referenced a number of perceived negative aspects of the school, telling underclassmen they will deal with these issues during high school.  As the speech went on, the student referenced his perspective of a story heard which involved another student. His comments had many inaccuracies, inflammatory statements and unsubstantiated accusations.

Administrators called the student in afterward to explain how spreading rumors and inaccurate information was extremely problematic. We met with him at great length, discussing several options for a restorative resolution, or as a final option, if the student didn’t want to work towards a resolution, disciplinary options would be undertaken (per school district policy) that could include not walking at the upcoming graduation ceremony.  After considering the options, he opted to not participate in graduation.

Even when people speak about very real and serious problems in the world in which we live, if they add untruths about other people, including students and staff, it can be considered harassment and bullying. When untruthful comments are made in public forums, such as hallways, classrooms or assemblies, we need to be mindful of their potential effect on others, and have a duty to protect them.

The staff at Heritage High School is dedicated to ensuring the physical and emotional safety of our students.  Depression, mental health, bullying, sexual assault, and the right to not be falsely accused of such, are all very valid concerns.  We work hard at ensuring our students are physically and emotionally safe every day.  We thank you for your support of your children and the school in that common goal.”

Students at Heritage High School planned a walk-out for Friday morning to protest the school’s reaction and to support Charles. His supporters also took to social media with #LetCharlesWalk.