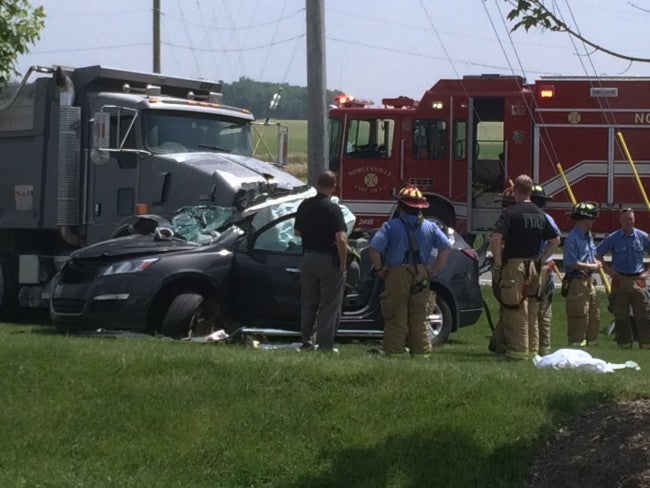 NOBLESVILLE, Ind. (WISH) – Neighbors are worried that an intersection where a car crash occurred is prone to accidents.

Tuesday’s crash happened just before noon at 156th Street and Boden Road. Investigators said a 17-year-old driver and her 12-year-old passenger were westbound on 156th when a dump truck heading south on Boden hit them. Both were taken to the hospital in critical condition. The teen needed to be airlifted to Sidney & Lois Eskenazi Hospital while her passenger was taken to Riley Hospital for Children at IU Health.

Neighbors, especially parents who live nearby, were upset to hear what happened, but some of them weren’t surprised.

Investigators said it’s an average intersection when it comes to traffic flow. But when 24-Hour News 8 posted the story on Facebook, several people said it is dangerous. And the people who pass through it regularly explained to us why.

“The speed is 45 miles per hour,” Eleanor Smith said about Boden Road. “However, most people come through here going a lot faster than 45.”

Standing in the shadow of her backyard, Smith has a clear view of Boden, where drivers head north and south passing cars carefully waiting at stop signs on 156th. Smith’s concerns include drivers not stopping completely for the stop signs.

She added then when trying to head east on 156th, trees and utility poles block the driver’s view of southbound traffic.

“So if I’m going east I’m inching my way out into traffic to make sure that I don’t get hit or if I’m going south I’m doing the same thing,” she complained.

If her experience at the intersection isn’t enough, the skid marks trailing through the nearby ditch tell their own story.

They came from the crash that happened earlier in the day when police say the driver heading west on 156th was hit by the dump truck heading south.

“We can only suspect that at this time that for some unknown reason, the Traverse pulled out in front of the dump truck,” said Lt. Bruce Barnes, Noblesville Police Department.

News of the wreck upset Smith but it didn’t surprise her.

“After being here 5 1/2 years I’m surprised we haven’t had more accidents,” she said.

In our short time at the intersection we saw drivers forced to inch forward on 156th, trying to get a clear view of the southbound traffic.

Another person was pulled over by police. Combined with crash from earlier, Smith said they should all serve as reminder for people behind the wheel.

“I always tell my son drive safe, drive for the other drivers you know, because not everybody’s going to pay attention to speed, stop signs,” she said. “You’re not going to always see if somebody is coming from the opposite direction.”

We also reached out to the Noblesville Police Department and the Hamilton County Highway Department Thursday night. We wanted to know if this intersection had a history of crashes or drivers getting ticketed but we couldn’t get those answers.