Shelbyville man admits he buried girlfriend: ‘I’m not a monster’ 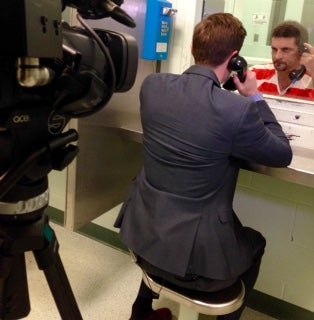 SHELBYVILLE, Ind. (WISH) – A Shelbyville man admits he lied and remained silent for years while authorities, and his girlfriend’s family, worried that his girlfriend might be missing.

Scott Schuck admits he knew that the whole time.

“Them four or five years, I lived in a prison,” Schuck said. “It may not have appeared that way. But inside, I was in prison.”

During a lengthy jailhouse interview Thursday, Schuck opened up about his girlfriend, Rebecca Cassidy, her death, disappearance and why he remained silent for so long. The interview came just days after Schuck pleaded guilty to aiding in voluntary manslaughter and being a habitual offender as part of a plea deal with prosecutors.

“I’m not a monster, I had a lot of decisions to make that night. Don’t think I hadn’t forgot that for the last five years,” Schuck said during the exclusive interview with 24 Hour News 8.

And yet, Scott Schuck claims that’s what happened – that there was “no love lost” between his mother and Rebecca; and that on the night of April 10, 2010, he claims Wilma Schuck struck Rebecca Cassidy with a frying pan.

“It just got the best of her, she picked a frying pan up and cracked her. I mean hit her hard,” Schuck said. “I did not see it but Rebecca had fell in front of me in my lap and that’s why I looked up and seen my mom and i’m like ‘what the, what the hell?'”

Schuck admits he did not render aid, went outside and returned to find his mother on top of Cassidy. He later admitted to helping bury Cassidy’s body in his backyard.

When pressed on how he did it, Schuck said, “I dug a hole and laid her in it.”

When pressed further for what was going through his mind during such a scenario, he paused, then said: “God forgive me.”

According to court documents, Schuck admitted to police that he shoved Cassidy causing her to strike her head and later strangled her.

It’s a confession he says he made to cover for his mother. His defense attorneys, Mark Kamish and Andy Baldwin, argued that the alleged confession should not be admitted because it was obtained after prosecutors knew Schuck had legal representation.

“I never touched her,” he said. “Mom and I then moved the body where I buried her.”

As part of the plea agreement, Wilma Schuck will not be charged.

When reached for comment earlier this week, Wilma Schuck said “I don’t have anything to say. Quit calling me.” She then hung up on a reporter.

“My sister and I are not happy with the plea agreement. We do not feel like justice was served. Our sister was murdered! He sat in his house day after day. Knowing what happened that she was buried in the yard. While our family worried and grieved not knowing anything.”

Earlier in the week, Special Prosecutor Stephen Koester said while the situation “was not ideal” it allowed for some closure for the family.

“Whether he was solely responsible in or not in these types of cases. If you aid someone in committing an offense, you commit that offense, he has pleaded guilty to voluntary manslaughter,” Koester said. “If I had to give my opinion I would say that is probably highly unlikely, to reach the plea we did, however you get there either through accessory liability or the actual commission it’s the same.”

Schuck will be sentenced on April 15th. He could receive a 30-year sentence, but under the plea agreement, is eligible for a sentence modification.