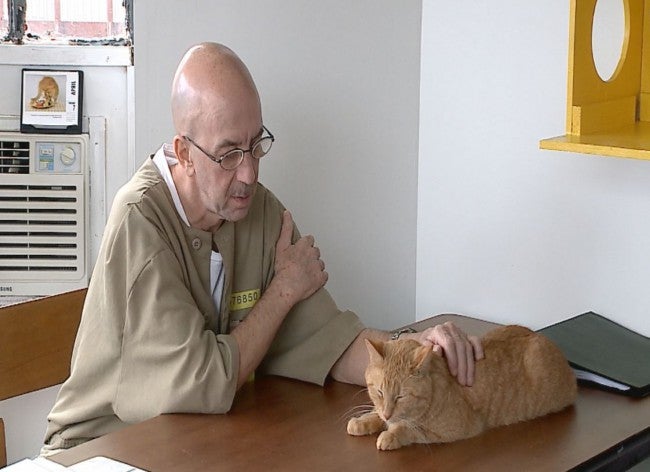 The program is officially called FORWARD, which stands for Felines and Offenders Rehabilitation with Affection, Reformation and Dedication.

It started in late March at the facility, and officials say it’s a win-win for everyone.

A dozen cats live in a revamped office space within prison walls. The animals are cared for, groomed, and the office is cleaned by several carefully-cleared offenders. The cats come from the Animal Protection League in Anderson.

Maleah Stringer, director of the Animal Protection League, says it’s a way to get some of the cats at the organization’s no-kill cat sanctuary into a larger room with more attention to hopefully be adopted some day. At the same time, they say it’s beneficial to the offenders, giving them not only a calming presence, but responsibility as well.

“I’ve had offenders tell me when they got an animal, it was the first time they can remember they were allowing themselves to care about something, to love something. That’s a pretty powerful statement,” said Stringer.

“No matter what your stress is, I always look forward to coming here for those nine hours. It takes a lot of stress away. It keeps my mind on good things, positive things, rather than just sitting in a cell for the majority of the time, pondering on things that may have happened to you. It’s definitely a stress reliever,” said offender Lamar Hall, who works with the cats. “Love will change characteristics from anybody’s tortured past. That goes for animals and humans, really.”

“In Indiana alone over 16,000 offenders are released back into our society a year. So we certainly want them to be different coming out than they were coming in. I think with the animals, this can be part of their rehabilitation program,” said Stringer.

A main goal of the program is to get the cats out of cages they may be in at the shelter and into a room where they get more freedom to roam and play. The idea is that the cats in the program will be adopted by staff or offenders’ families, allowing other cats to be brought into the sanctuary.

“This program means a lot. It helps me to calm down, to relax,” said offender Barry Matlock. “It gives me something to look forward to each and every day. It gives me a reason to strive to do better than I did yesterday, and to stay out of trouble.”

Staff members at the prison are also able to come in to the cat sanctuary throughout the day. Many say it’s one of the best parts of their day. They say they’ve seen cats change over the past month as well.

“The cats are getting lots of interaction with people. Lots of them have come from a bad situation, and so this makes them better with people, better in a home,” said Kara McEntire, Internal Affairs Secretary for the Pendleton Correctional Facility.

The prison does have a dog training program already that they say has been very successful.

The cat program was made possible entirely through donations. Even the areas where the cats play are made by the offenders with recycled material.

The Animal Protection League also has three animal programs at the Correctional Institutional Facility next door, including a cat program. There also is a cat ownership program at the Indiana State Prison in Michigan City, where offenders have to earn the right to keep their cat and pay to feed and care for it.

For more information on donating or adopting a cat or dog from the Animal Protection League, click here to head to their website.