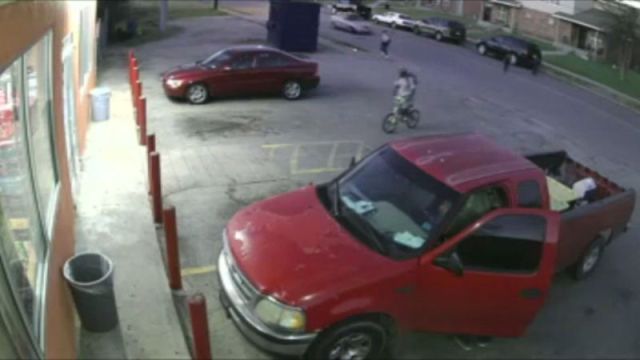 AUSTIN (KXAN) – Austin police are releasing shocking video of a child being hit by a car in the hopes of finding the driver.

The hit-and-run crash happened on Jan. 23 just after 7 a.m. in east Austin. In the video, which was recorded by a nearby convenience store, an older child can be seen riding a bicycle across the street, followed by a second child and then 5-year-old Marquese Earls.

As Marquese crossed the street with his friends and brother, a driver in a silver vehicle hit him, knocking him into the air. The vehicle then sped away from the scene.

Marquese’s mother, Samisha Hutchison, says her son was taken to the hospital and was treated for a severe concussion, facial bruising and abrasion. Amazingly, he was only in the hospital for one day.

Hutchison says the area where the children were crossing is in a school zone and police say the driver was likely going around 30 mph. “This whole neighborhood is just nothing but school zones, so how can you even fly through here at all?” asks Hutchison.

Five-year-old Marquese Earls’ injuries after being hit by a car on Webberville Road on Jan. 23, 2017. (KXAN Photo/Chris Nelson)