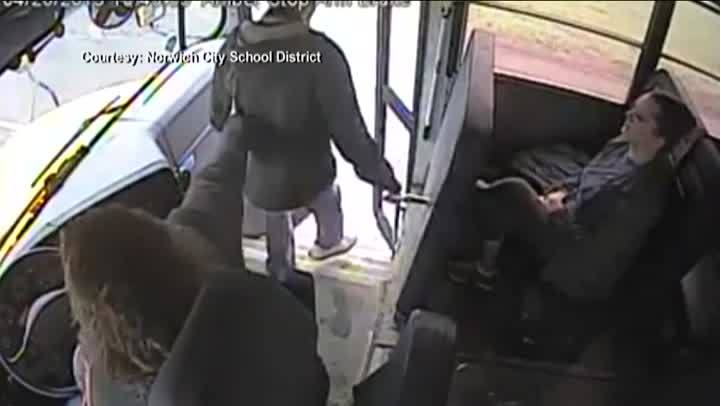 NORWICH, N.Y. (WISH) — Shocking video shows the scary moments when a car speeds past a school bus door in Norwich, N.Y., nearly hitting a 13-year-old student as he was about to get off the bus.

Now, the school bus driver is being hailed a hero after video surveillance shows her yanking him back on the bus just in time.

“The last thing I remember was getting yanked back and the car flying by,” explained Matthew Squires, the student who was nearly hit by a car exiting the school bus.

Samantha Call was the driver behind the wheel whose quick thinking and reflexes saved Squires’ life.

“Here comes a silver car on the side,” explained Samantha Call, school bus driver. “Matt is probably the third step down now and all I could think of was Matt is going to get hurt, so I just pull him.”

Squires’ mother said when she first saw the footage of the incident, she couldn’t believe her eyes.

“I cried. I honestly cried.. If she hadn’t had been so vigilant and looking behind her bus because no one really thinks of someone coming on the door side of the bus,” said Christina Beardsley, Matthew’s mom.

A camera mounted behind the bus driver caught the shocking incident. Call said the district felt it was important to share the video and spread awareness of school bus safety.

“It’s got to get out there. It’s got to stop,” said Call. “People have to pay attention to this.”