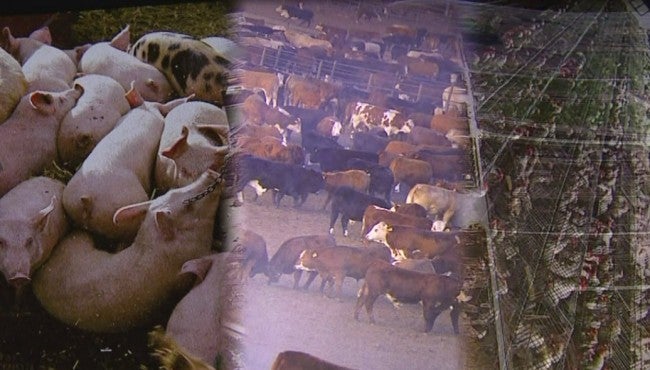 INDIANAPOLIS (WISH) — Environmental and farming activists clashed at the Statehouse on Tuesday on whether there should be more regulation on how farmers feed their livestock.

The controversy centers around concentrated animal feeding operations, known by the acronym CAFOs, where farmers feed and raise thousands of livestock in a facility.

Some are concerned that bodies of water are getting contaminated from the disposal of animal manure. Some neighbors are riled up about the smell.

Thousands of cows, chickens hogs are in a confined area rather than out in fields as part of CAFOs.

“Our county is a rural county, and grain and livestock farming are a critical part of our economic base,” said Matt Chapman, a farmer in Henry County.

Some neighbors of CAFO farms said the conditions are miserable.

“If that air stays in there and gets stale, the hogs can’t survive, but yet I’m expected to survive with that stuff blowing out on me,” said Richard Himsel, who lives in Danville about a quarter-mile from a CAFO farm.

He said his home value has been slashed in half because of the smell. His wife can no longer stay there every night.

“I’m just like everybody else. I worked hard to get what I have. And now, because of this, it has taken away from me,” he said.

“Prevent citing CAFOs within 2 miles of the shorelines of all lakes and reservoirs,” said Timothy Dygert, of Columbia City.

But some farming activists said it’s impossible to put the blame solely on manure runoff and they’ve worked to improve the odor concerns. Now they want to find a solution to allow farmers to keep costs down safely.

For example, in Henry County, the county awards points to farmers based on how well they meet certain criteria before they can build a CAFO.

“Along with addressing our neighbors’ concerns protecting the environment and improving the health of our pigs, we got a great score from the court scorecard system and our IDEM (Indiana Department of Environmental Management) permit and we were on our way,” Chapman said.

Tuesday was the second summer study committee hearing about the topic before the members will make recommendations to the legislature on whether any bills should be presented next session.