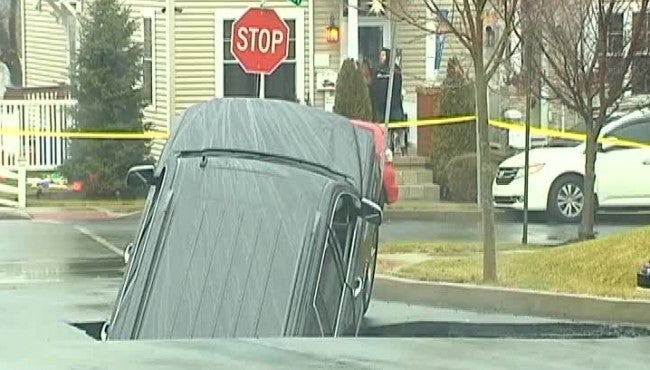 EASTON, Penn. (WISH) — A sinkhole on Monday opened up under a street and swallowed half of a sport-utility vehicle in a city on the eastern Pennsylvania border.

The driver got out without serious injury.

Surveillance video showed the ground cracking as the car drives toward a stop sign. The rear of the SUV ended up below ground.

A witness, Tanya Rinebold, said, “All you hear is this loud scratch and boom. Kind of sounded like a garbage can going into the back of a garbage truck.”

The ground opened about 1:30 p.m. Monday near the intersection of James and East Hleinhans streets.

An hour later, the black Suburban was nearly vertical, with the wipers still on and smoke coming out of the tailpipe. The sounds of water could be heard gushing under the street where the SUV was stuck.

Neighbors say the driver, who lives in the area, luckily got out safely.

Another witness, Demary Flores, said, “I was screaming on the street to make sure nobody was in there.”

Flores, said she has lived on James Street for 10 years, talked about a possible explanation. “When these houses were built, they said they were built on sinkholes. So, that’s not very, that’s why the insurance for these houses in this area is a little higher than anywhere else. So, we kind of (are) aware of the sinkholes but we never expected something like this.”