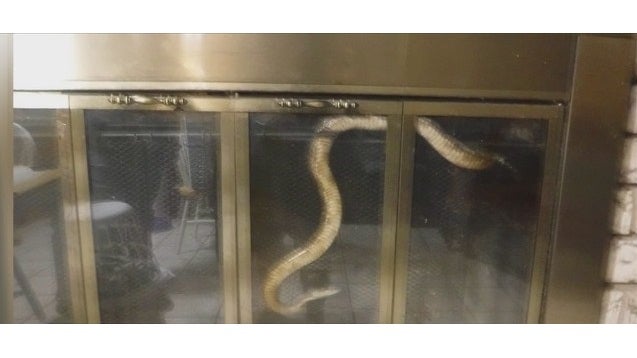 LUFKIN, Texas (KETK) — On a list of things you would expect to find in your fire-place, a large snake typically isn’t one of them.

For one Trinity County man, that’s exactly what he found.

“There’s never a dull moment around our place and I think this proves it,” said Gary David Antley, who found a snake in his fireplace.

Just after 2:30 a.m. July 7, Antley was finishing up some paperwork when he heard a loud “clunk” and he went to investigate.

“And I go from mild mannered just passing through, I pass up the panic stage and I go clean to ‘oh, God, what do I do!?'” Antley said.

To his surprise, a large Texas rat snake dropped down his chimney for a visit.

Antley grabbed some barbeque tongs and his daughter set up the camera.

“I just gritted my teeth and I went for it, went in there and grabbed him by the neck,” Antley said. “Well, nothing too bad happened and then he got tangled up in the fire curtain.”

Thankfully Texas rat snakes, or chicken snakes, are nonvenomous and harmless to people.

Antley recognized what kind of snake he was dealing with immediately.

“I (knew) I wouldn’t die from snake venom, I would die from a heart attack,” he said.

The video, which as of July 10 has around 25,000 views, has even caught the attention a some snake experts.

“I’m always interested in people’s reactions to snakes,” said Gordon Henley, the Ellen Trout Zoo director. “And having a snake in the fireplace in the house is an unusual occurrence.”

How exactly could a snake get in your fireplace?

“A tree near the house with a branch over the house,” Henley said. “The snake can just literally go right up the bark of that tree and get out on a branch and get into the chimney from the top.”

Though the experience brought Antley from a baritone to a soprano he is glad people have seen it.

“They can use it for entertainment, but I definitely wouldn’t use it for a training video on how to remove a snake because there’s got to be a better way,” he said.

After it was over, he turned the snake loose a few miles down the road, where it can eat mice and hopefully not bother anyone else.