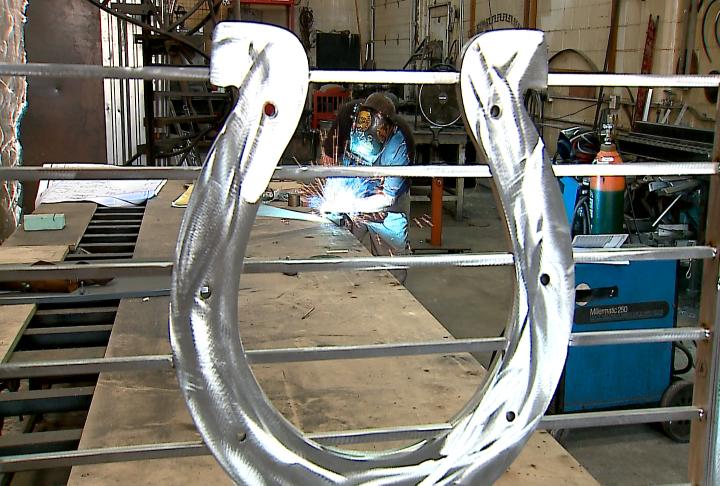 Feeney fell in love with sculpting while at Cathedral High School. It’s turned into a side job for 20-plus years, but this new assignment is no side project.

“When I went in and did my third interview, I was driving out of the Colts complex and I really started to think I might get this,” Feeney said.

Feeney’s pitch to design former Indianapolis Colts and Denver Broncos quarterback Peyton Manning’s statue came just under a year after the artist lost his father-in-law. Feeney received the call from the Colts that he got the job while at a banquet honoring his late father-in-law.

Feeney said he believes help came from above when the Colts decided the sculptor needed to be a Hoosier.

“I always think about him,” Feeney said of his father-in-law. “He was a special, special guy, and I can see the smile on his face.”

After receiving word he landed his dream job, Feeney went to Nashville to meet Peyton Manning. Then the real work began and after 16 months of tinkering, No. 18 is set to evade the north plaza at Lucas Oil Stadium this Saturday.

“I don’t even know how many hours it has taken,” Feeney said. “It’s countless.”

Just as Manning operated on the field, this project was calculated to every last detail.

“Is that knee pad on the right spot? His knee brace, the helmet style and size, all the way down to his chin strap was all approved with the help of the Colts equipment that dressed him for 14 years.”

Peyton’s bronze started as a 3-D rendering on the computer before becoming a Styrofoam base. Once Feeney got his hands on it, he poured on 350 pounds of clay before sending it to the foundry for the casting process.

“I don’t see this piece as being mine. I see this as a sculpture presented to Peyton from the people of Indianapolis.”

The secret is safe until Saturday. The hope is this will be a story to tell … on every Sunday for eternity.