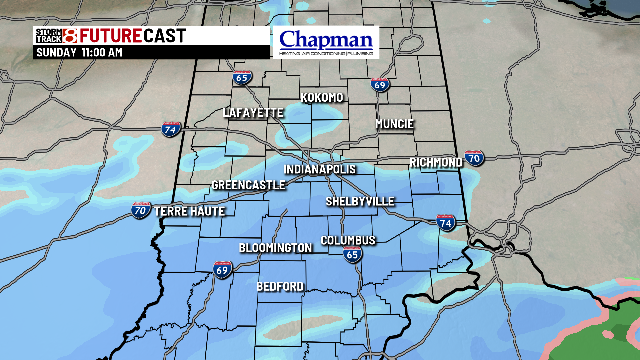 INDIANAPOLIS (WISH) — Another round of accumulating snow moves in this weekend.

Relatively quiet conditions expected for the majority of the daytime hours across the area. Expect a partly cloudy, to eventually mostly cloudy sky.  Highs top out in the lower 40s Saturday afternoon.

Clouds continue to increase. As our Sunday system moves closer to the state, we should see a few flurries flying around after Midnight. Little to no accumulation is expected through daybreak, Sunday.

Lows fall to the middle to upper 20s.

The southern system moves through the eastern portions of the country. While we are on the northern edge of the system, we should see enough snow for some accumulations across most of central Indiana. Snow should arrive by mid-morning, and continue at least through the early afternoon, before breaking up and moving out by the late afternoon/early evening hours.

Highs on Sunday only reach the upper 20s and lower 30s.

Brutal cold blast moving back into the Midwest to open up the work and school week. Overnight lows Sunday night/Monday morning fall the single digits, and wind chills likely fall below zero. Highs on Monday and Tuesday may not make it out of the teens for many locations. Next system of interest comes in Thursday and Friday, as a wintry mix Thursday afternoon changes to all snow. Some accumulations could be possible again heading into Friday before warming up closer to average temperatures for next weekend.