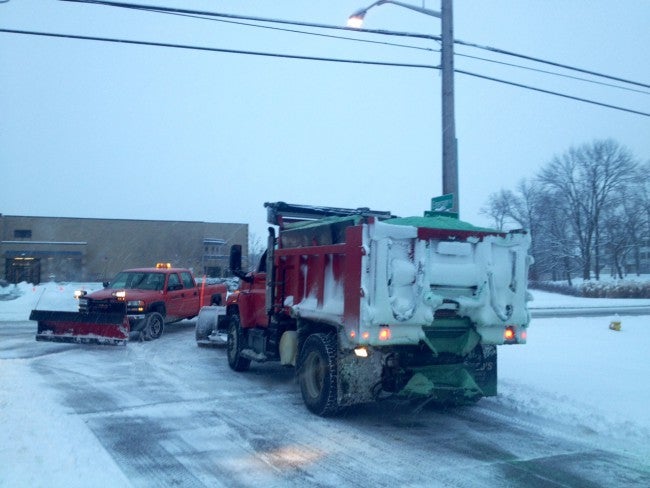 INDIANAPOLIS (WISH) – 12:00 P.M. UPDATE: The left lane of eastbound I-70 is closed because a truck hit the median. Traffic has slowed near 87.9-mile marker, near the Shadeland exit.

—11:00 A.M. UPDATE: The left lane of westbound I-70 is closed at the 117-mile marker because police are towing the semi truck from the road.

Also, police are at the 154-mile marker of westbound I-70 to tow a semi truck that crashed into the median earlier this morning.

Both lanes of I-69 have been cleared at the 225-mile marker near Anderson. They were closed earlier because a semi was blocking both lanes.

And earlier slide offs had slowed traffic on nearby southbound lanes of I-69. Those lanes have now cleared up, but traffic is still slow.

—9:30 A.M. UPDATE: I-69 Southbound is slowed near the 222-mile marker because of a number of vehicle slide offs. Emergency crews are on location at this time. Pendleton police are asking drivers to use caution in this area.

9:00 A.M. UPDATE: Pendleton troopers report that a I-70 westbound jack-knifed semi is slowing traffic. Expect slowing and stopping near the 156-mile marker. The semi is off the road but will not be towed until this afternoon.

IndyGo buses are reporting 10-minute to one-hour delays on many of their stops throughout the Indianapolis area.

8:30 A.M. UPDATE: Northbound lanes on I-69 just south of the Anderson exit have been closed because of a semi blocking both lanes. This occurred at the 225-mile marker.

8 A.M. UPDATE: Traffic continues to move slowly on area interstates, but pavement is now visible on highways in Marion County.

Many Indianapolis Public Schools buses were delayed because of weather Tuesday morning, though the school system did not have a two-hour delay.

7 A.M. UPDATE: Westbound I-74 in Shelby County is moving again after a crash there.

Meteorologist Randy Ollis reports snow amounts have been the heaviest from I-70 and north. Totals in that region have been in the 4 inch to 6 inch range. No additional accumulation is expected today. Highs will be near 20 degrees.

6:30 A.M. UPDATE: Counties surrounding Indianapolis report only a handful of slide-offs in their area, though many reported that roads were slick.

6 A.M. UPDATE: A crash has closed westbound I-74 at the 108-mile marker, which is near the Fairland Road exit.

5 A.M. UPDATE: Roads around Central Indiana are passable but snow-covered in many places, according to INDOT, Indiana State Police and 24-Hour News 8 reporters checking on conditions.

INDOT and ISP urged drivers to give themselves extra time and to take is slowly while snow plows catch up with the snowfall. INDOT spokesman Harry Maginity said snow was falling so fast between 2 a.m. and 3:30 a.m. that INDOT plows couldn’t keep up. As of 4:45 a.m., plows were working to catch up and make more progress on area interstates.

ISP in the central and northern parts of the state reported somewhat difficult road conditions. In ISP’s Pendleton region, roads were still bad but INDOT was out working on roads, troopers said, adding that roads were “passable.”

In ISP’s Lafayette region, slide-offs were happening along I-65 and troopers warned drivers to drive slowly.

Morgan County was a troublesome spot for roads covered by ISP’s Putnamville post, but troopers there also described the roads as passable. In that area, troopers had three crashes and one slide-off between midnight and 3 a.m.

As of 5 a.m., there were 11 school delays/closures called in to 24-Hour News 8. Click here for an updated list.

Have photos of the snow? Send them to reportit@wishtv.com.

INDOT cameras on the city’s near north side showed Interstate 65 lanes covered in snow. INDOT plow drivers advised motorists to slow down and keep a distance in between other vehicles.

For a county-by-county travel status map, and what a travel advisory, watch and warning mean, click here.

Remember to download our new WISH-TV Weather App to get radar, watches, warnings, road conditions and easily send us your weather pictures.

9:30 P.M. UPDATE: Police dispatchers around central Indiana said around 9:30 p.m. that there were no major issues on roadways since snow began to fall Monday evening.

Dispatchers in Morgan County said the snow had prompted a number of slide offs on Interstate 70. They also said their county roads were slick.

8:30 P.M. UPDATE: Snow is making its way into the Indianapolis metropolitan area.

Stay with the Storm Track 8 Team as we track the snow and the cold.

6:30 P.M. UPDATE: Officials in Wayne County have issued a travel advisory ahead of the incoming snow storm.

The Level 1 Travel Advisory will go into effect in the county at 11 p.m. Monday, as roadways are expected to become snow-covered, slick and hazardous. Tipton County also issued a Travel Advisory ahead of the storm.

For a county-by-county travel status map, and what a travel advisory, watch and warning mean, click here.

The Indianapolis Department of Public Safety sent out the following tweet Monday evening about their preparations:

A Winter Storm Warning has been issued from 7 p.m. Monday night until 10 a.m. Tuesday morning.

The following counties are listed in the warning:

The snow will begin Monday night, and many areas north of I-70 could see anywhere from 3 inches to 6 inches of snow. There will be a sharp cutoff south of Indianapolis. Snow totals just south of the city will be in the 1 inch to 3 inches range. Farther south of that, most of southern Indiana will see less than 1 inch of snow. Snow should wind down Tuesday morning.

The Indianapolis Department of Public Works is preparing for the snow and cold temperatures. Twenty Indy Snow Force drivers were out overnight monitoring conditions and treating the roads. DPW spokeswoman Stephanie Wilson said the Indy Snow Force is ready for whatever weather may come.

“Weather doesn’t make appointments, so it’s always sort of hit and miss depending on what the forecast says. So we just want to make sure that we have the forces out there and salt on the roads to make sure whatever tonight brings, people will be able to get home safely, ” Wilson said.

Wilson reminded drivers to keep a good distance behind the car in front of you, watch out for snow plow drivers and give plows room to work.

Stay with the Storm Track 8 Team as we track the snow and the cold.

Remember to download our new WISH-TV Weather App to get radar, watches, warnings, road conditions and easily send us your weather pictures.