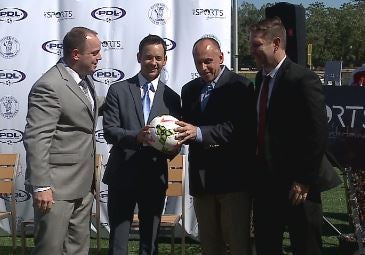 KOKOMO, Ind (WISH) – Kokomo is excited about the controversial Municipal Stadium that has now proved to be a success.

“We’ve had a successful inaugural season and its been a regional draw,” said Kokomo Mayor Greg Goodnight.

And now officials are broadening the stadium’s scope by bringing in minor league soccer.

“We see nothing but success on the horizon,” said Steven Short of the Premier Development League.

Kokomo High School’s soccer team is already playing on the field. The Premier Development League is pre-professional, just a step below the pros.

“We are the league that provides a platform for players to pursue professional career,” said Short.

The league has 65 teams in 31 states and in Canada.

Seven home games and seven away games will be played starting May 2016.

Finishing touches still need to be completed on the stadium that was built for the Kokomo Jackrabbits. More 44,000 people saw games at the stadium during the team’s inaugural season. It was the best attendance record for the entire Prospect League.

“I bought a half-season ticket and then bought all but four games of the other half, so I’ve seen 26 games,” said Karen Salmons.

“We wouldn’t be here standing and talking about soccer if it wasn’t for the support that we had for baseball in this last year,” said Josh Schaub of MKE Sports & Entertainment, which owns the Jackrabbits and the new soccer team.

“All I can call it is a success, so that’s a little bit of validation,” said Mayor Goodnight when asked about the controversy surrounding the stadium.

The stadium was marred in lawsuits, and at one point the entire project was threatened when FEMA threatened to withhold disaster money for the entire state if parts of the stadium weren’t redesigned.

The stadium is built in a floodplain. The city made the changes prior to opening before the season.

“Everything we’re trying to do is work on the quality of life for the people of Kokomo,” said Mayor Goodnight. “We feel like the stadium with the success last year of baseball and now adding soccer to that as well will only enhance that.”

The team’s owners are asking for help in naming the team. Click here to help choose the name.