Softball player with cerebral palsy epitomizes love of the game 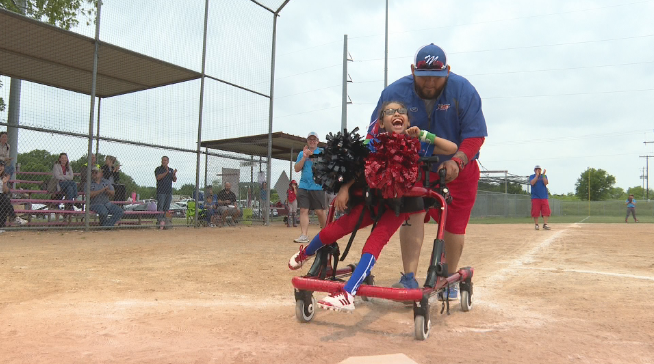 MANCHACA, Texas (KXAN) — Her grin is the first thing most people notice about Reese Ramirez.

“When I met her, she was smiling ear to ear,” Rudy Mendoza, Reese’s softball coach, said. The 8-year-old is playing her first season at the Manchaca Optimist Youth Sports Complex, and she can’t help but show her excitement.

The league has never had a player with cerebral palsy take the field before Reese, but leaders hope she’s not the last child with special needs they can encourage to play the game they love.

“It’s not easy by any means, but that smile makes it all worth it,” Sasha Akroosh-Ramirez, Reese’s mom, said.

Baseball is in their family’s blood. After years of sitting in the stands with her daughter for her son’s games, Akroosh-Ramirez asked the little league director if Reese could cheer on her friends’ team from the dugout.

So, at the start of each inning, her mom, brother or coach pushes Reese to a tee set up at home plate in her wheeled walker. Her helper assists in swinging the bat, then pushes her around the bases as both teams and the crowd cheers.

“Any way we can get a ball player out here that wants to participate and come and enjoy this game, then that’s what we’re trying to do here,” said Jeremy Covert, the youth sports complex director.

Covert is the one who encouraged Akroosh-Ramirez to do more than cheer in the coach-pitch league, and he designated a parking spot just for her next to the field. It’s closer and easier to access than the handicap spots, and a sign posted there reads, “Reserved for Reese and her family.”

“It makes everybody happy,” Reese’s brother, Greyson Ramirez, said. “Her smile is amazing.”

Greyson plays baseball for Bowie High School, the same team his dad played for alongside Reese’s coach years ago. The freshman goes to all of his sister’s games and is her preferred helper on the field.

“We just wanted to figure out a way for her to get around all the bases and give her a chance to have fun, get out there, swing it,” he said.

Now the youth sports league hopes other kids with special needs follow Reese’s lead. “It’s just a game,” Covert said. “It’s a game for boys and girls to play and have a fun time.”

The scoreboard at the end of the game says someone wins; the look on Reese’s face as she rounds the bases says everyone does.