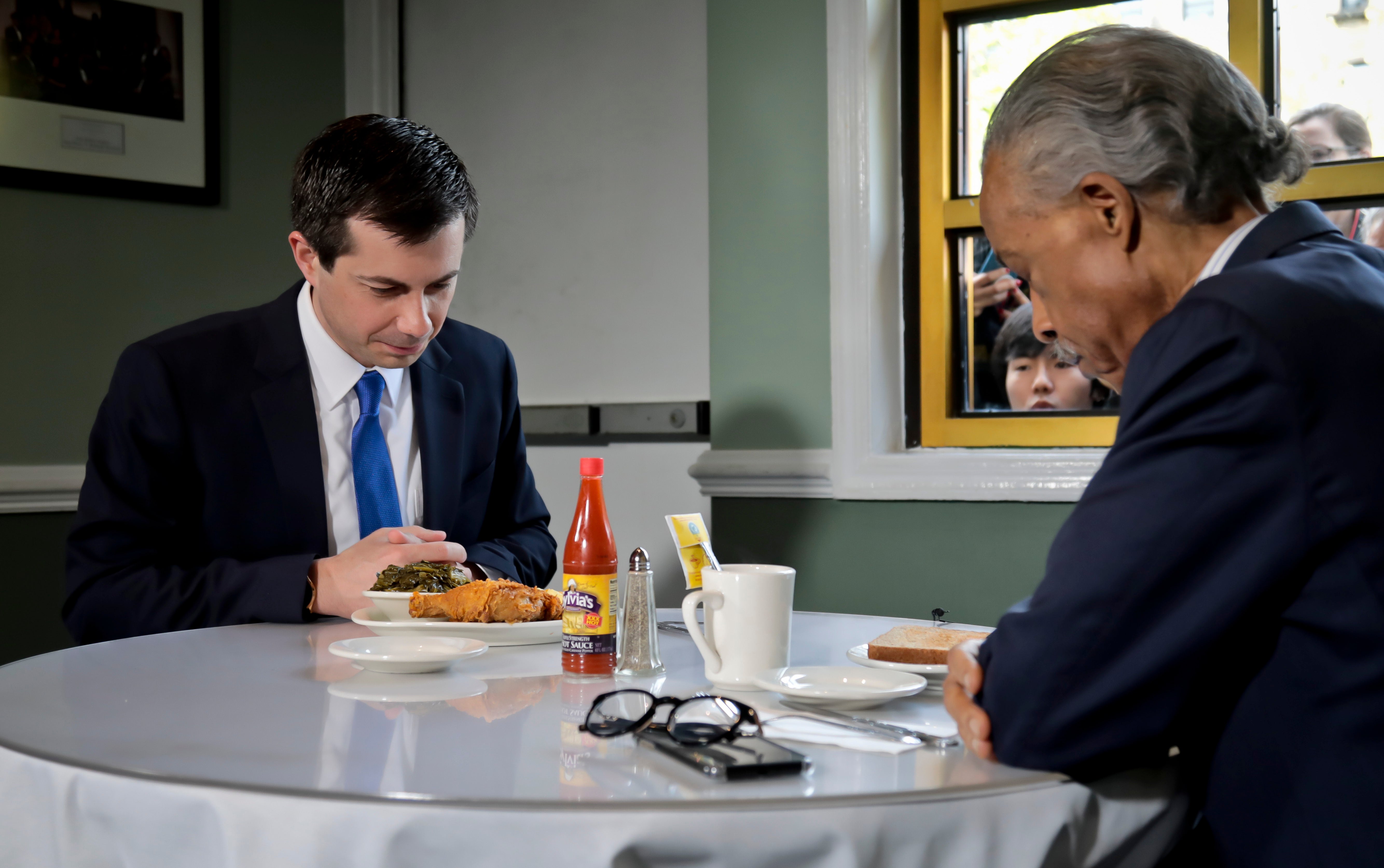 NEW YORK (AP) — Democratic presidential hopeful Pete Buttigieg met Monday with the Rev. Al Sharpton, as the Indiana mayor faces scrutiny of his record on race and is stepping up his outreach to African Americans.

Buttigieg and the civil rights leader met for lunch in Harlem at Sylvia’s Restaurant, a cornerstone of black American culture where Sharpton has long brokered difficult racial conversations with embattled political leaders.

Buttigieg said Sharpton suggested the meeting, which he says occurred as his campaign is “working to broaden our coalition.”

“I’ve talked a lot about generational change and generational politics, and one of the things I know I needed to do is to be in touch with every generation in the struggle for equality,” Buttigieg said.

Buttigieg said Sharpton wanted to know about his experience as mayor of South Bend and some of his most challenging times as mayor.

“It’s been complex, and it’s really formed me in terms of my understanding of race, politics, policy and community,” Buttigieg said.

The 37-year-old veteran and Rhodes Scholar has gained in popularity since joining the 2020 race earlier this year.

Along with the increased name recognition have come questions about his record in South Bend, where shortly after taking office Buttigieg fired the city’s first black police chief, and about issues of housing and inequality in the city.

Buttigieg said racial justice and equality are important to him, and an important part of South Bend’s story.

“One thing I learned early in is having good intentions is not enough and that things don’t look the same depending on your life experience. Policing to economic inclusion, just because you’re trying generically to take care of everybody, doesn’t mean that support will reach everybody in the same way,” he said.

“There are too many structural — and in many cases, intentionally built — barriers to that. If you’re not equally intentional about tearing down those barriers, you’re gonna come up short. Our community held me accountable on that, they really educated me on that.”

Buttigieg spent more than an hour at the restaurant, where he ate fried chicken, macaroni and cheese and collard greens before shaking hands with customers.

Earlier this month, Buttigieg was among several Democratic presidential candidates who attended Sharpton’s National Action Network conference in New York, where he was asked to explain his use of the phrase “all lives matter” in the early days of the Black Lives Matter movement. The mayor said he meant to show solidarity with the movement but stopped using the phrase when he realized it was antagonistic.

Buttigieg has also said he’s “learned some hard lessons” as mayor, including on race, and that “any white candidate needs to show a level of consciousness around issues like white privilege.”

He plans to focus on black voters during a visit to South Carolina next month that includes a stop at a historically black university.

Sharpton sat down with another 2020 Democratic hopeful, California Sen. Kamala Harris, in February amid criticism of her record as a prosecutor.