Southport PD to unveil memorial for Lt. Allan on 1-year anniversary of his death 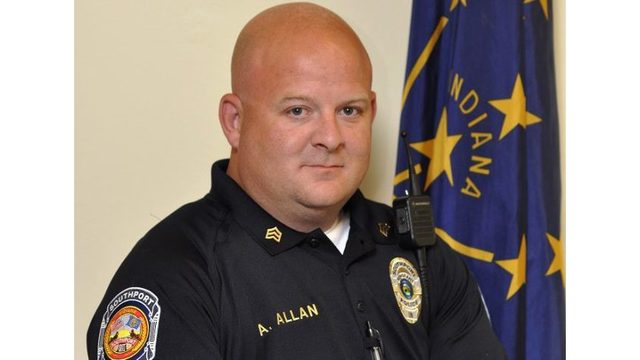 SOUTHPORT, Ind. (WISH) — Friday marks one year since Southport Police Lieutenant Aaron Allan was shot and killed in the line of duty.

The Southport Police Department will be unveiling a memorial for him Friday afternoon at the city’s new municipal complex located at 137 Worman St.

The memorial unveiling and grand opening of the municipal center will take place from 2 to 3 p.m. with an open house from 3 to 6 p.m.

Allan was shot and killed when he responded to a call of an overturned vehicle.

He was checking on the people in the car, when police say the driver of the car shot him multiple times.

A honor chair now sits at the Southport Police Department. It features the badge Lt. Allan had on him that day and the nickname he earned because of his big heart: Teddy Bear.

“We had a family whose husband had a brain tumor, and they had a little, I think she was four or five-year-old daughter. She had lost her job, her car broke down, so Aaron went and bought  a battery and put it in her car and then he calls and says ‘Hey we need to do something for Christmas.’ I don’t know how much stuff that little girl got but I know we took it in four police cars,” said Southport Police Chief Tom Vaugn.

“He was that one who wanted to make an impact, it wasn’t an impact on how many people can I arrest, it’s how can we make the community better.”

Lt. Allan was not just a police officer, he was also a dad.

The day he was shot and killed he also walked his little boy to the bus stop for his first day of kindergarten, according to a Facebook page his wife created called First Day Hero.

She recently created the page asking people to be present in their kids’ lives like her husband.

She’s asking people to post pictures of parents taking their kids to the bus, to school and at home before they leave for the day using #FirstDayHero.