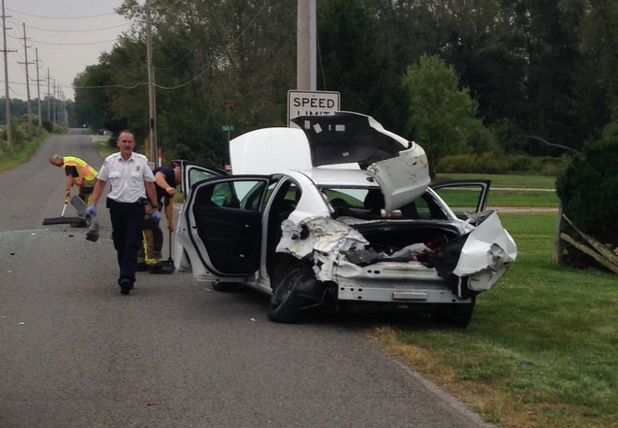 KOSCIUSKO COUNTY, Ind. (WANE) A child was transported to a hospital with minor head injuries after a shock from a spider caused a crash involving a school bus and a “driverless” car, according to the Kosciusko County Sheriff’s Department.

Around 4:15 p.m. Friday, deputies, along with Syracuse police and fire units, responded to the area of 5571 E CR 1400 N on reports of a vehicle striking a school bus.

Officers arrived and found a 9-year-old boy lying outside a Dodge Avenger, which had collided with the bus.

Kosciusko County Sheriff’s Department spokesperson Chad Hill said investigators at the scene determined the child’s mother, Angela K. Kipp, 35, of Syracuse, was originally backing out of her driveway. Hill said she reportedly jumped from the vehicle after there was a spider on her shoulder.

However, her son was still in the Dodge and climbed from the back seat to the driver’s seat to attempt to hit the brake pedal. Instead, he hit the accelerator while the Dodge was in reverse, causing it to collide with the passing Wawasee Corporation School Bus.

There were no children present on the school bus when it crashed and its driver was not injured, according to Hill.

This crash is still under investigation.