Spike in Fentanyl use puts law enforcement on alert 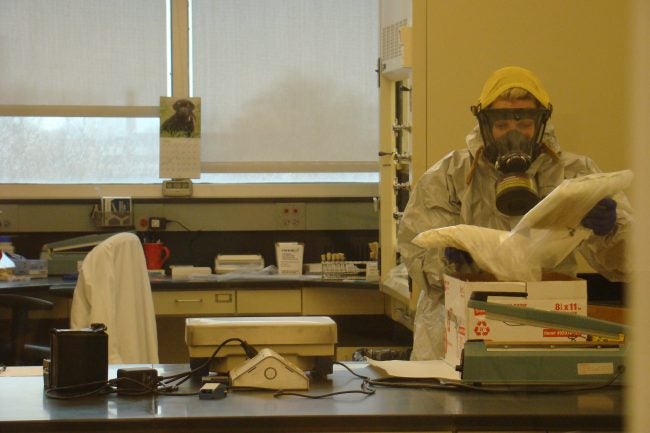 INDIANAPOLIS (WISH) —  Police departments in the area are stepping up efforts to protect themselves against a powerful drug they say is on the rise in Indiana.

Fentanyl is a drug so potent, experts say simply touching it could lead to an overdose.

“Law Enforcement in general have been put on alert,” said Captain Jeff Rasche with the Hancock County Sheriff’s Department.

During every traffic stop and every arrest police officers are already careful, but now Hancock County deputies say they’re now concerned about Fentanyl.

Hancock County is seeing more and more of the powerful drug. Fentanyl is a drug experts say is around 50 times more potent than morphine. It’s designed to treat chronic pain, but now people are lacing heroin with Fentanyl.

Rasche said Fentanyl is so potent, arresting a drug user or collecting evidence could lead to an overdose for an officer.

“This fentanyl is so dangerous that just getting a small amount on your hand can cause a severe reaction or even overdose situation for our officers that are handling it,” said Rasche.

Rasche said his department is working to make sure deputies now how to handle or how not to handle drugs that could contain Fentanyl.

The spike is not only a concern for State Troopers, but also Indiana State Police chemists and analysts.

“Fentanyl is definitely one of the ones [drugs] where we have the most precautions. Just because of how little it takes to be a lethal dose,” “said Griffin.

Griffin showed 24-Hour News 8 photos taken while experts analyzed kilos of suspected Fentynal. ISP cleared the lab down to one person, who worked as others watched from outside the room to make sure nothing went wrong.

“We kept it in the hood, we didn’t have it out in the air or open to exposure,” said Griffin.

24-Hour News 8 reported back in October 2015, that State Police put Narcan in each lab, in case someone was ever exposed to Fentanyl. Griffin said the overdose-reversing drug needs to be at easy access, so it works in time.

“A lot of times the DEA has reported that people have been found with syringes still in their arm, because it [Fentanyl] affected them that quick,” said Griffin.

Griffin said law enforcement and prosecutors need to be cautious with Fentanyl even after ISP has analyzed it.

“It’s going to be the next big problem,” said Rasche.

Indiana State Police recently put together a video warning about the dangers of Fentanyl. You can watch it here.