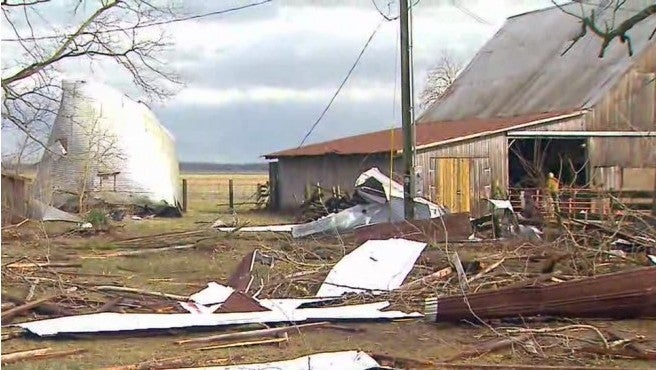 One of those storms left a Brownstown man looking to pickup the pieces of his farm, including a pole barn and three grain bins that were destroyed.

No one injured by the storm damage at the farm of Mike Isaacs in the 4100 block of North County Road 25 East.

That’s a good thing because the barns, the grain bins and even his cattle, which weren’t hurt, can be replaced, but people can’t be, Isaacs said.

Isaacs said he was at work at Independent Land Surveying in Brownstown with his brother, Jonathan Isaacs, when the storms started blowing through the area. “I saw the top of the dark cloud that was moving through,” Mike Isaacs said.

The brothers went to his home after hearing about the damage and were going about putting together a game plan to get to their cattle, which were in another barn, and then move them to a cousin’s place while repairs occur.

Duane Davis, executive director of the Jackson County Emergency Management, said most of the damage from Thursday’s storms was confined to the Isaacs’ farm and nearby farms.

Besides the damages at the Isaacs farm, there were several overturned irrigation systems, some down trees and a television tower and some small grain bins, trashcans and shingles blown off roofs into fields.

Schools in Jackson County delayed dismissal from school for students who ride the school bus as a precaution. Events at Crothersville Community Schools and one at Seymour Middle School was canceled, too.