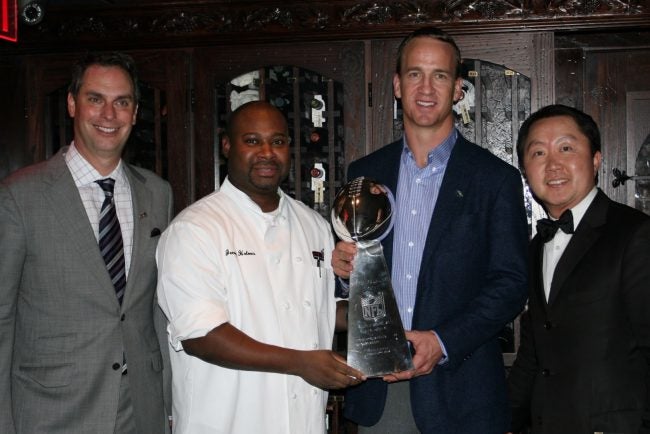 INDIANAPOLIS (WISH) – Craig Huse sits comfortably on a bar stool at St. Elmo Steak House, the 115-year-old restaurant he co-owns with his father. It’s said to be the oldest steakhouse in Indiana, still in its original location and has seen an elevated profile in the last two decades since becoming a post-game tradition for Peyton Manning.

“When he showed up the night before he reported to training camp and had dinner at St. Elmo in the [Tony] Hulman Room, you just never forget things like that,” says Huse.

In 1998, Manning joined agent Tom Condon for dinner at St. Elmo. At the time, Manning had already missed three days of training camp due to what he called a delay on “the business side of things.”

Manning recounted the meal in his 2016 NFL retirement speech at the Colts’ practice facility saying “I met Tom Condon over at St. Elmo – it was [Tom’s] third trip to St. Elmo that night and then I came over to the Colts’ facility the next morning, signed my contract and drove up to Anderson with Bill Polian and was at practice that afternoon.”

Huse says Manning’s dinner in 1998 started a new tradition for the future hall of famer.

“The energy and buzz here was really special,” says Huse. “Fans realized that he dined here after a lot of games, so they would be here in the bar. For so many years, [Peyton] just walked straight through the bar and had his Bud Light and debrief right after the game.”

The Bud Light beer tap at the St. Elmo bar is still adorned with a Colts helmet in honor of Peyton.

Sometimes the crowds were too much for the quarterback and St. Elmo staff was there to accommodate.

“We gave him a code to the elevator so he could just zip in off the sidewalk whenever he needed to,” says Huse.

The elevator is tucked behind a door on Illinois Street, just feet from the restaurant’s main entrance. The special elevator code would bring Manning to the basement level of St. Elmo where his favorite private dining room, The Wine Cellar, is just steps away.

The room features a single rectangular table with seating for up to 14 people. The room is flanked on two sides by wine cellars.

“There was a time when [Peyton] said ‘I come here after every game and I’d kinda like to see Eli play in the later game,’ so we popped a TV into the room he liked to dine at all the time.”

Over the years, photos of Peyton have been added as adornment for the walls and halls of the iconic restaurant. Manning became such a part of the St. Elmo family he even brought the Lombardi trophy back to the restaurant for the staff to see after the 2007 Super Bowl win.

In that same year, Peyton became a part-owner of the St. Elmo off-shoot, Harry & Izzy’s.

“We diluted my share [in Harry & Izzy’s] and other people’s shares and made room for him and he prepared like he prepares for a game,” says Huse. “He came to me with a list of probably 30 questions that he wanted to know about this investment and the business. As we got up from dinner he made sure he checked off every question he wanted to get to.”

Huse noted that in this instance he saw first-hand the preparation Manning was known for.

After spending four seasons with the Denver Broncos, Manning returned to the Colts’ facility on March 18, 2016. He addressed fans and colleagues in a news conference about his retirement from the league. In his thirty-one minute speech, he mentioned St. Elmo twice as one of his favorite things about the city.

“Below God, family and football, somewhere on Peyton’s list is a steak dinner and we were really blessed to have him come here after most home games during his 14-year career,” said Huse.