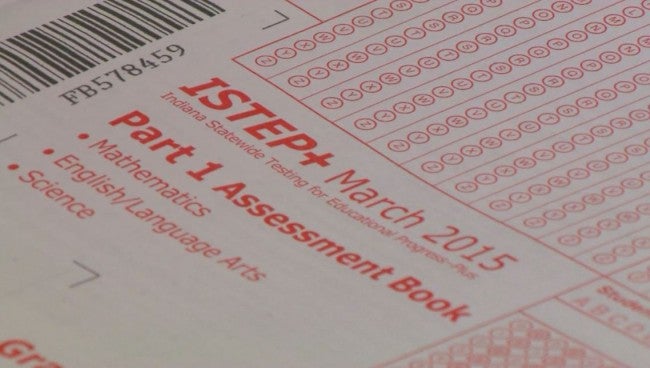 INDIANAPOLIS (AP) – The Indiana State Board of Education moved forward on Wednesday on a new A-F grading formula for Indiana schools that and will take a final vote in mid-April.

The new grading formula would factor in each student’s improvement on the ISTEP test. Current grades for schools depend on the percentage of students who pass the ISTEP.

The board also put aside a measure that would have changed course requirements for high school diplomas. Critics said the measure was premature since the state recently changed requirements and has yet to gain data on its effect.

But the vice chairwoman said a recent review of Indiana’s troubled standardized student exam was not a subject of the board meeting Wednesday even though a summary of the independent report was found to have edits from a state employee.

Though the review on the validity of the 2015 ISTEP exam was deemed independent, The Associated Press found that the summary of the report contained alterations from State Board of Education executive director John Snethen, who was hired by Gov. Mike Pence. The board’s agenda Wednesday included the review which was commissioned last year, but that did not come up.

“From my standpoint, I do not have any questions,” Vice Chairwoman Sarah O’Brien said. “We’ve been in the loop and following the conversations.”

Samantha Hart, press secretary for State Schools Superintendent Glenda Ritz, also said the board did not seem to have any follow-up since the validity of the report findings had not been altered.

But what was changed was language in the summary that had reflected poorly on Pence and GOP lawmakers’ decision to drop national Common Core standards and adopt last year’s test with new state standards. The revamped test had tougher standards and produced dismal grades. Democrats criticized the new exam, saying it was hastily rolled out.

The Republican-controlled Legislature has voted to scrap the ISTEP test beginning in 2017 in favor of creating a panel to find an alternative test. The bill is still on its way to Pence’s desk.