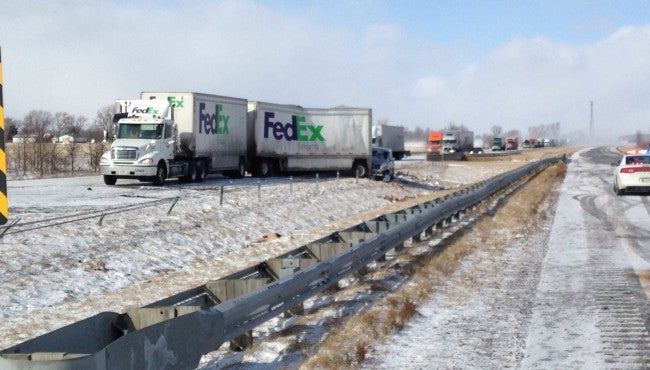 INDIANAPOLIS (WISH) – A number of pile-ups were reported throughout Indiana on Saturday, as severe winds created white out conditions for drivers.

A massive pile-up involving more than 20 cars in Delaware County shut down both directions of Interstate 69. Several ground ambulances were called to transport the injured individuals to area hospitals.

Police in Huntington County reported a multi-vehicle crash on I-69 that affected both north and southbound lanes near the 281 mile marker. It’s reported that a semi tractor trailer and an RV were among the vehicles involved.

In Columbia City, emergency crews worked to clear both directions of U.S. 30 near West Lincolnway of wreckage and vehicles. Police reported as many as 20 cars involved in that pile-up.

Another 20-car pile happened in DeKalb County on Saturday. Police said they were investigating whether or not white out conditions contributed to that crash. Thirteen cars also collided in Fulton County.

Up north, the LaPorte County Sheriff’s Office said they were investigating a multi-vehicle crash on U.S. 20 near CR 500 East that included three cars, a truck, a van, an SUV and a tractor trailer.

Police have not been able to report the number of injuries involved in any of the reported accidents Saturday.