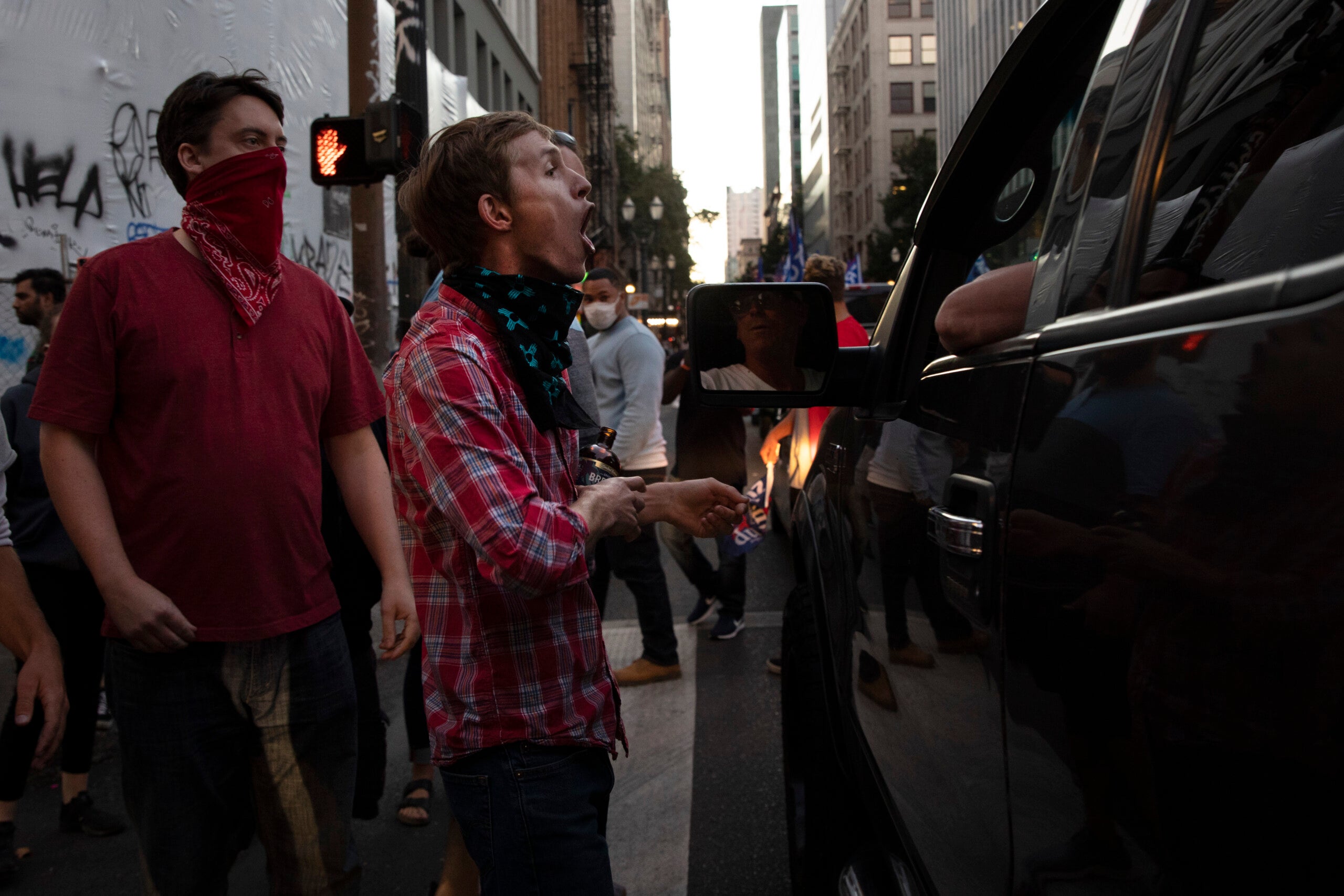 A Black Lives Matter protester yells at a supporter of President Donald Trump during a rally and car parade Saturday, Aug. 29, 2020, in Portland, Ore. One person was shot and killed late Saturday in Portland as a large caravan of President Donald Trump supporters and Black Lives Matter protesters clashed in the streets, police said. It wasn’t clear if the shooting was linked to fights that broke out as a caravan of about 600 vehicles was confronted by protesters in the city’s downtown. (AP Photo/Paula Bronstein)
by: GILLIAN FLACCUS Associated Press
Posted: Aug 31, 2020 / 06:43 AM EST / Updated: Aug 31, 2020 / 06:44 AM EST

PORTLAND, Ore. (AP) — Oregon State Police will return to Portland to help local authorities after the fatal shooting of a man following clashes between President Donald Trump supporters and counter-protesters that led to an argument between the president and the city’s mayor over who was to blame for the violence.

Protesters were back on the streets for a demonstration Sunday night outside a public safety building. Police declared an unlawful assembly and detained several people after saying protesters were seen throwing projectiles.

After Trump called Ted Wheeler, a Democrat, a “fool” and faulted him for allowing mayhem to proliferate in the liberal city, the visibly angry mayor lashed out at the president during a Sunday news conference, addressing him in the first person through the TV cameras.

“That’s classic Trump. Mr. President, how can you think that a comment like that, if you’re watching this, is in any way helpful? It’s an aggressive stance, it is not collaborative. I certainly reached out, I believe in a collaborative manner, by saying earlier that you need to do your part and I need to do my part and then we both need to be held accountable,” Wheeler said.

“Let’s work together…Why don’t we try that for a change?”

The testy news conference followed a chaotic 24 hours in Portland that began when Saturday evening when a caravan of about 600 vehicles packed with Trump supporters drove through the liberal city and was met with counterprotesters. Skirmishes broke out between the groups and, about 15 minutes after the caravan left the city, a supporter of the right-wing group Patriot Prayer was fatally shot.

“We love Jay and he had such a huge heart. God bless him and the life he lived,” Gibson said in a Facebook post.

It wasn’t clear if the shooting was related to the clashes in Portland, which has become a flashpoint in the national Black Lives Matter protests since George Floyd was killed in May and an increasing centerpiece in Trump’s law-and-order re-election campaign theme.

Late Sunday Oregon Gov. Kate Brown released details of a plan to address the violence in Portland while protecting free speech. She said the district attorney’s office in Multnomah County, which includes Portland, will prosecute serious criminal offenses and the sheriff’s office will work with other agencies to hold people arrested for violent behavior and ensure there is adequate jail space.

Also, Brown said Oregon State Police will return to Portland to help local police, and nearby law enforcement agencies will also be asked to assist.

“We all must come together—elected officials, community leaders, all of us—to stop the cycle of violence,” the Democrat said in a statement.

Trump and other speakers at last week’s Republican National Convention evoked a violent, dystopian future if Democratic presidential hopeful Joe Biden wins in November and pointed to Portland as a cautionary tale for what would be in store for Americans.

Police have released little information about the fatal shooting and Chief Chuck Lovell said Sunday that investigators are still gathering evidence, including surveillance video from area businesses. Earlier, the agency released a plea for any information related to the killing, including videos, photos or eyewitness accounts.

Patriot Prayer is based in Washington state and was founded in 2016. Since early 2017, its supporters have been periodically coming to Portland to hold rallies for Trump, ratcheting up tensions long before the national outrage over Floyd’s death sparked more than three months of protests here.

Portland has seen nearly 100 consecutive nights of Black Lives Matter protests and many have ended with vandalism to federal and city property, including police precincts, a county jail, the federal courthouse and City Hall. In July, Trump sent more than 100 federal agents from the U.S. Department of Homeland Security to safeguard federal property — a move that instead reinvigorated the protests.

Thousands of people clashed with the federal agents each night for two weeks, as agents lobbed tear gas canisters and pepper spray at the crowds and some protesters tossed fireworks at the agents and shined lasers in their eyes.

Those agents withdrew July 31 but smaller nightly protests have continued in pockets of the city. More than 600 people have been arrested since late May.

On Sunday, Portland authorities urged people to stay away from the downtown as they try to de-escalate tensions.

Wheeler begged those who wanted to come to Portland to “seek retribution” to stay away.