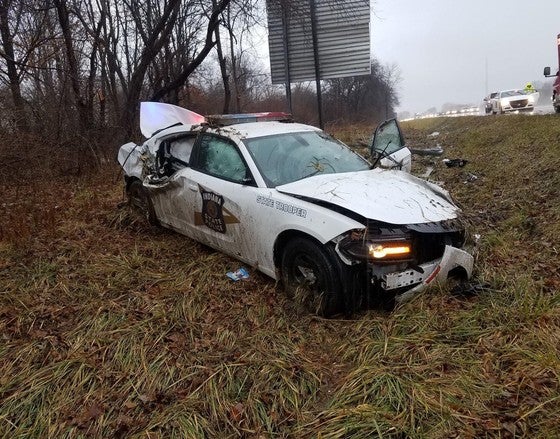 MONROVIA, Ind. (WISH) – A state police trooper was hurt Monday afternoon when his car hydroplaned and then rolled several times before coming to rest in a ditch off Interstate 70 in Hendricks County.

Master Trooper DuJuan Presley-McFadden, a 20-year veteran of the Indiana State Police, was driving a a 2018 Dodge Charger to a crash scene about 1:45 p.m. when the car hydroplaned on I-70 about a mile northeast of the Monrovia exit for State Road 39, said a news release from Senior Trooper B.J. Patterson.

The trooper’s car stopped rolling after it struck an “I-beam” of a road sign, the release said.

Presley-McFadden was on his way to an I-70 crash about 22 miles away near the Cloverdale exit for U.S. 231 in Putnam County.

The trooper was treated at Hendricks Regional Health hospital in Danville for cuts, abrasions and head injuries and later released.

Presley-McFadden was wearing his seatbelt at the time of the crash.