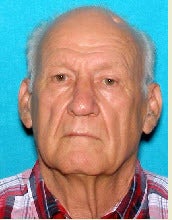 PLAINFIELD, Ind. (WISH) – A Statewide Silver Alert has been issued for a missing 72-year-old Plainfield man, according to the Indiana State Police.

Epperson is described as a white male who is 5 feet 6 inches tall and weighs 155 pounds. He has white hair and hazel eyes.

Officers say he is missing half of his index finger on his left hand and has two medically drilled holes on the top of his head.

At the time of his disappearance, Epperson was wearing a long sleeve collared-shirt and blue jeans.

He is believed to be driving a red 2012 Ford Escape with Indiana license plate D890UC.

Police say Epperson is said to be in extreme danger and possibly in need of medical attention.

Anyone with information on Epperson’s whereabouts should contact the Avon Police Department at 317-272-4485.