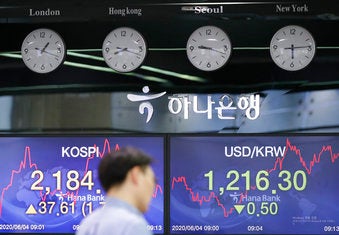 (AP) — Stocks ended mostly lower on Wall Street after a day of wavering, ending a four-day winning streak for the S&P 500, its longest in nearly four months.

The benchmark index slipped 0.3% Thursday. It’s still about 8% below its record set in February after being down nearly 34% in late March. Grim economic news continued to roll in.

A report showed that the number of U.S. workers filing for unemployment benefits eased for a ninth straight week, roughly in line with the market’s expectations.

But economists saw pockets of disappointment after the total number of people getting benefits rose slightly. Bond yields rose.

Stocks are falling in Thursday afternoon trading on Wall Street as the market heads for its first loss in five days.

The S&P 500 was down 1%, as of 3:15 p.m. Eastern time, with losses accelerating late in the afternoon, after earlier being on track for its first five-day winning streak since December. The index is about 8.5% below its record set in February after being down nearly 34% in late March.

A report showed that the number of U.S. workers filing for unemployment benefits eased for a ninth straight week, roughly in line with the market’s expectations. But economists saw pockets of disappointment after the total number of people getting benefits rose slightly. That number had dropped the prior week, which had raised hopes that some companies were rehiring workers.

The next big piece of economic data will land early Friday, when the Labor Department releases its monthly jobs report for May. It’s expected to show that employers slashed 8.5 million jobs last month and that the unemployment rate jumped from 14.7% to 19.8%.

“The May unemployment rate will likely be the worst one, and it will get better from there,” said Randy Frederick, vice president of trading and derivatives at Schwab Center for Financial Research. “The market should have it baked in for the most part.”

Many professional investors have been arguing that the stock market’s rally, which reached nearly 40% between late March and Wednesday, was overdone and that a pullback was likely coming. Stocks began surging following massive aid for the economy from Washington. More recently, they’ve climbed on optimism that the recession created by the reaction to the coronavirus outbreak could end relatively quickly as states and countries lift lockdown restrictions.

Critics said stocks were rising much more quickly than expectations for corporate profits and other measures of financial health. They also pointed to risks in rising U.S.-China tensions and the possibility of second waves of coronavirus infections.

Continuing a recent trend, investors on Thursday were cycling out of stocks that had been the steadiest when the hunt was for companies that can win in a weak, stay-at-home economy. Instead, investors moved into some areas of the market whose fortunes would benefit most from a healthier economy.

Losses for technology stocks and health care companies were some of the heaviest weights on the market. Apple slipped 1.3%, Johnson & Johnson fell 2% and UnitedHealth Group lost 3.5%.

On the winning end were airlines. American Airlines surged 38% after it said it plans to fly 55% of its normal U.S. schedule next month. That’s up from only 20% in April, as demand for travel inches back toward normal following the pandemic.

Other airlines rose in concert, with United Airlines up 13.9%, Delta Air Lines up 11.4% and Alaska Air Group up 5.6%. Airlines had been among the market’s hardest hit stocks earlier in the sell-off on worries that pandemic would mean no one wanting to fly for either business or vacation.

Charles Schwab rose 4.7% after it said antitrust regulators won’t block its acquisition of TD Ameritrade. The companies expect the deal to close in the second half of this year.

Longer-term Treasury yields were rising Thursday. That area of the market had been one of the first to warn of the coming economic devastation from the coronavirus outbreak, and it’s been much more circumspect in recent weeks than the U.S. stock market.

The yield on the 10-year Treasury rose to 0.81% from 0.76% late Wednesday. It tends to move with investors’ expectations for inflation and the economy’s strength.

European stocks were weaker after the European Central Bank said it expects the region’s economy to shrink 8.7% this year due to the pandemic. It also announced it was nearly doubling its rescue program to help the economy.