Students use blue jeans to fight against sex assault 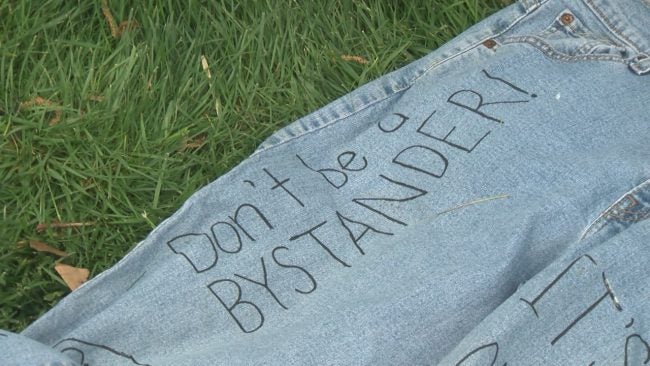 It was Denim Day — a day for people to show support for sexual assault survivors by wearing denim.

Denim Day started after the Italian Supreme Court overturned a rape conviction in the 1990s because the alleged victim wore tight jeans. Justices said the woman must have helped remove the jeans, implying consent. Women in the Italian parliament and across the world responded by wearing jeans in protest.

IUPUI’s Alpha Chi Omega sorority taught their classmates a lesson that’s not on the syllabus by laying out dozens of blue jeans on a campus lawn.

Another group brought their jeans to the Indiana Statehouse. Center of Hope and other support teams ran a denim rope through the building.

“People need to be more supportive of the victims of sexual assault and not put the blame on them,” Jahnke said.

Jahnke said she invited every state lawmaker and none of them showed up.

“We want everyone to be aware of what’s going on, but in their defense, the House is not in session,” she said. “They may be doing other things required of their position.”

Activists said Denim Day is more important now than ever before.

A 2015 study from the Association of American Universities said 23 percent of female college students have experienced some form of unwanted sexual contact.

“It’s obviously always something you have to worry about and just be very careful and use the buddy system,” Elliott said.

Alpha Chi Omega members said they plan to participate in Denim Day every year. They hope to eventually fill the entire lawn outside Taylor Hall with blue jeans.