Subway closes for the day after bug zapping video surfaces 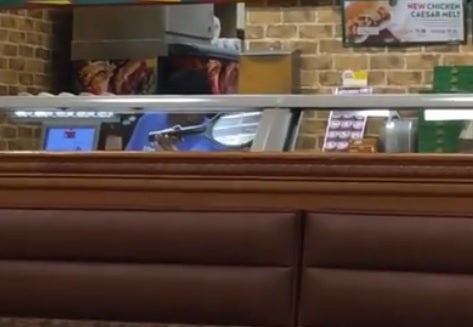 FRANKLIN, Ind. (WISH) — A local Subway was temporarily closed for the day after cell phone video shows an employee using a bug zapper behind the counter.

It happened on East King Street in Franklin.

The man, who recorded the video, told 24-Hour News 8 he was shocked and surprised by the whole thing.

He said he did not think anyone was going to believe that this was happening in a restaurant so he recorded the video.

Justin Clemons shared this 55 second cell phone video on his Facebook page. The video now has more than 55,000 since Monday.

“I think the power of social media has really taken over, I mean, like I said I had no idea it would grow to the way it was,” said Clemons.

He wanted to let others know about the unsanitary practice at the restaurant. He said he stopped by Subway for something to eat with his two boys after a golf match.

“Everything was pretty normal you go and order your food and go and sit down and it was at that point where my back was point to them,” he said. “I started to hear a few different zaps and noises that just weren’t normal.”

Clemons said he looked over and saw the employee behind the counter.

“It was my 13-year-old son that ended up saying I’m pretty sure he’s using one of those bug zappers,” he said.

Clemons said he pulled out his phone and started recording. The video shows the employee using what appears to be a bug zapper in the preparation area.

“Honestly, I think my kids were pretty disgusted as well,” he said. “Because they had noticed it and asked if it was normal. You have a 13-year-old and a 4-year-old asking.”

The restaurant was closed Tuesday. A spokesperson for Subway issued a statement saying, “Food safety is our top priority. All Subway restaurants are individually owned and operated. As soon as the restaurant owner was made aware of the situation, he immediately took action by closing his restaurant and discarding all open products. He has contracted a professional cleaning service to ensure that the restaurant is in top working order.”

Clemons said it’s going to take some time before he can eat at Subway again.

“As far as what they can do to earn my business back I think it’s a little too soon right now you know letting everything soak in before I’m even able to come close to answering that question,” he said.

The Johnson County Health Department said an inspector stopped by the store today to check on the violation and to look for the cause of the problem.

The inspector found what he believes to be fruit flies or gnats coming from outdated produce or floor drains.

The health department said the restaurant was not fined, but given an informal warning. The inspector will return Wednesday morning for another check.

“We didn’t want to see this over the food area,” said John Bonsett, Director of Environmental Health.

The man who shot the video, Justin Clemons, received a message on his Facebook post from Subway, stating that they would like to reach out to him personally.

“We truly regret you had this experience Justin, and we are looking into this right now. Food safety is our top priority, and we are working with the franchisee to address immediately,” said Subway in the post.