Support group for parents of addicts expands in central Indiana 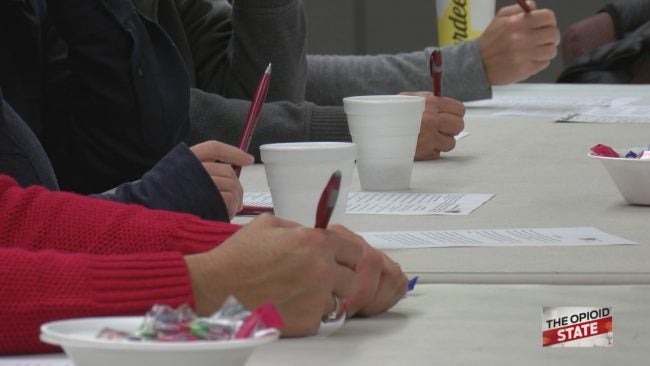 GREENWOOD, Ind. (WISH) — There are thousands of family members and friends who struggle along with opioid addicts. Many often feeling hopeless and helpless.

“I wasn’t real hopeful, to be honest,” Steve Kowgitz said. “We were pretty well run down. We were at a low for sure.”

That was two years ago, when Steve and Melissa Kowgitz attended their first PAL group meeting in Avon. PAL stands for Parents of Addicted Loved Ones and those at the meetings 24-Hour News 8 attended asked for anonymity. They come with hopes to help their family member who may be hooked on drugs, alcohol or both, but one addiction is more prevalent than others.

“I would say probably 75 to 80 percent of the parents who are at the meeting their loved one’s drug of choice is heroin,” Melissa said.

Fortunately, for the Kowgitz family, their daughter hasn’t used in about six months and is in recovery, but their fight isn’t over.

“Getting that education out there, is really, really important,” Melissa said.

So, Steve and Melissa started a new PAL chapter in Greenwood, just four months ago, in an effort to reach more families.

“We went out on a whim and started this group and were like this is going to be huge and we had one person show up,” Melissa said.

But they knew more people needed help. The continued the meetings and by the third week, more than a dozen parents, grandparents and family members of addicts attended the meeting at Vineyard Community Church.

Now, they average 16 to 18 people each meeting.

“I think a lot of people deal with his in privacy and they hide it, because they feel like they’re alone. They feel like people are going to look at them differently, because they have a child and they admit that. I think if more people were vocal about their problems, they would find out that they have a lot in common with other people,” Steve said.

“I have found that my reaction to my daughter has, I think, helped her make better choices. I’m not enabling, I’m not telling her what to do, I’m allowing her to be an adult and make these decisions. And ultimately it’s her life, not my life and it also feels good not to be dealing with this by myself and to be with other parents that are going through the same thing. It’s a safe place,” Melissa said.

There are six PAL chapters throughout Indiana including Avon, Bedford, Crawfordsville, Greenwood, Jamestown, and Mooresville.