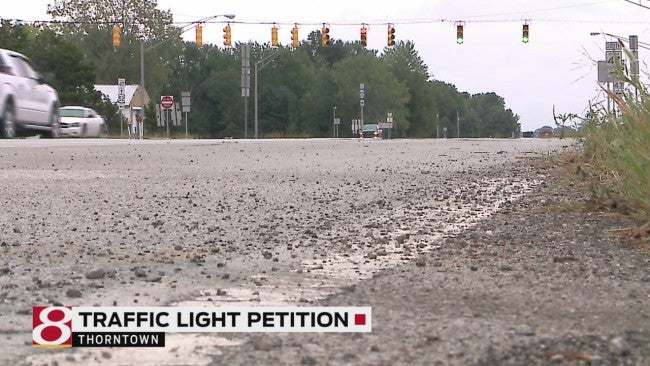 THORNTOWN, Ind. (WISH ) – Now that the Interstate 65 detour is over in Boone County, there’s a growing push to keep a temporary traffic light at a problem intersection.

Life has returned to normal for people traveling on U.S. 52 in Boone County. It served as a detour for Interstate 65 northbound.

The four week detour is over, and while the extra vehicles are gone, one thing is left behind creating debate among locals.

“I mean I get we have accidents there sometimes, but with most of that traffic being diverted from 65, now that it’s gone, we have a lot less of an issue with it,” Thortown resident Nathan Bewley said. “And it’s more of an inconvenience.”

“There’s a history with a lot of wrecks out there,” Thorntown resident Charlie Edwards said. “I think it would help, and I think the numbers show that.”

Neighbors are talking about a temporary traffic light. It was added during the detour.

INDOT is currently doing a study to determine if it should stay, which will look at traffic volumes and crash history. Before the light went up during the detour, there were nine accidents at the intersection.

After it went up for more than two weeks, state troopers say there was only one. That’s a big reason why some say the signal needs to stay.

To voice their opinion, an online petition was created. As of Wednesday, there were more than 1,100 signatures, including one from Teresa Burtner.

“I grew up in that area since I was in kindergarten and I lived there through high school and I’ve seen way too many wrecks and the stop light has helped tremendously,” Burtner said.

Burtner says her friend was killed in an accident at the intersection years ago. She’s wanted a light ever since.

And now that it’s there, she hopes it stays. “I don’t want another life to go,” Burtner said.

The Boone County sheriff was vocal about getting the intersection a light during the detour. He tells 24-Hour News 8, he’ll wait to see what the INDOT study will show.

But he is in support of a permanent signal at the intersection. INDOT said the study should take a few weeks.