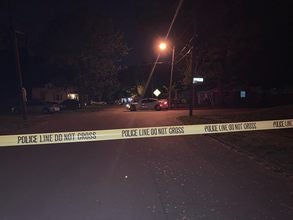 Officers from the Clarksville Police Department were dispatched to a home at 514 W. Howard St. Friday night around 10:30 for a domestic disturbance.

When officers arrived at the home they saw a man brandishing a gun at the doorway. Police said the man then went back into the house and barricaded himself in the home with the original caller who reported the disturbance.

Authorities said officers encountered the man again and he was still brandishing a gun. At least one officer fired upon the suspect and struck him after he refused commands to drop his weapon, ISP said.

Officers rendered aid to the suspect and he was taken to the University of Louisville Hospital where he later died.

The name of the suspect has not been released at this time.