Take Two: Preparing the 1st for the 2nd 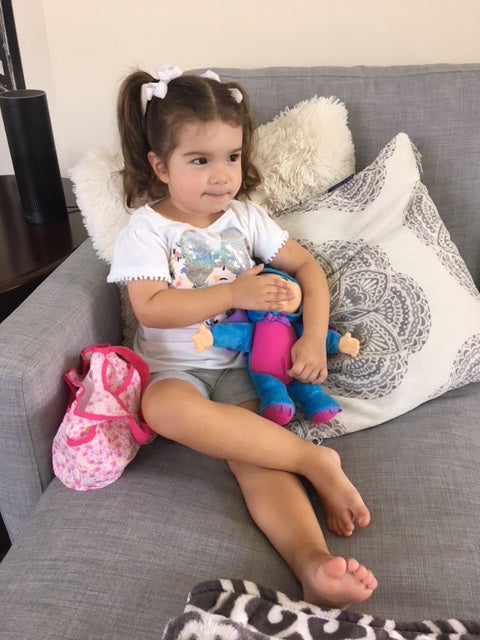 Editor’s Note: Take Two is a series of blog posts chronicling the experiences of three WISH-TV anchors (Lauren Lowrey, Kylie Conway and Amber Hankins) who have been pregnant together in 2018. Each woman is expecting her second child and each will have a baby boy.

INDIANAPOLIS (WISH) — I’m about to have my second baby and while I’m confident he and I will be just fine, helping my first-born daughter transition into this new idea of a family unit has really been my biggest concern. She will turn three years old in October — one-and-a-half months after this new baby is born — and the potential negative impact on her mental health fills my thoughts.

If she were turning two years old, we would have a different set of developmental problems to concern ourselves with and her mental health probably would not be one of them. But since she’s about to turn three years old, she’s incredibly conscious and verbal and I’m legitimately concerned about her ability to successfully transition to a role where she isn’t #1 for mom and dad.

Let me be clear: I fully realize having younger siblings is part of the life-cycle of a first-born, but the ensuing feelings of self-doubt, jealousy and resentment are big emotions for a pre-schooler. If you doubt the negative impact the transition to siblinghood has on a child’s psychology, just peruse this research. You might change your mind.

In an effort to lessen these emotions in my daughter’s transition, I put out an all-call last week with this Facebook post:

Okay, legitimate question for moms and dads: how did you prep your kids for a new baby? I want to write about it for my…Posted by Lauren Lowrey on Wednesday, August 8, 2018

I was flooded with great ideas about how other moms and dads helped their first-born sons and daughters prepare for a new baby. I felt it was important to list those ideas in a shareable format for other soon-to-be second-time parents. If you know someone who could use this, please share!

When reading books is already a part of your parent-child routine, adding a few new books about the upcoming life change really puts it into terms they understand. My husband and I spent $20 on Amazon last week and bought five books about becoming a big sister. Each one said something a little different, but all of them had the same goal: helping kids visualize what having a new baby will be like (the crying, the diapers, the night-waking, etc.)

Each book ended with a focus on love: love for the baby and love for the first-born. The library can also be a great source for these types of books!

I received a few great ideas from Facebook users centered around this concept. Karen wrote “take them out by themselves once a month on the date of their birth. My firstborn was born on the 15th of December so just the two of us went out on the 15th of each month.”

Another mom made a regular habit of doing what she called “dates” lasting an hour or less with the firstborn. She noted this could be a trip to the playground, one-on-one time at the grocery store, the library, or going out for a favorite treat.

The intention was to have planned time where mom and the oldest child were alone together while dad had one-on-one time with the new baby.

This is easier said than done, but no less important.

I had several Facebook users point out how important keeping routines will be, when possible, for your oldest child’s transition. Here’s an example of how I’ll try to keep this going.

For myself, I always put my daughter down for a nap after lunch. She and I might spend 30 minutes together in her room talking about her morning, reading books, singing songs and telling stories.

We also always sit down for dinner together between 5:30 p.m. and 6:00 p.m. I feel like if I can manage to continue doing some of those typical things, she will feel less like her world is imploding.

Buy a baby doll for the first-born to practice

We have been practicing a lot with pretend-diapers and a pretend-diaper-bag. My daughter has taken particular interest in swaddling her baby doll and taking care of it when it cries. This kind of imaginative play can help a child understand what a baby will need and prepare for it.

I had a few Facebook users point out that once the baby is here, I can have my daughter change her baby doll the way I’m changing her baby brother.

“When they feel left out,” wrote one Facebook user, “remind them that their baby needs care also.”

An old college friend with two young kids gave me this great idea. On top of finding a “big brother” shirt for her oldest son to wear to the hospital, she had his name put on the t-shirt, too!

I know it gave him a special sense of pride to have something that no one else could wear, especially at a time when it likely feels to them that many things are being taken away.

Let’s be honest, kids love having a present to open. When several commenters on my Facebook page made suggestions about gifts, I knew I had to include it in this list.

In many cases, these were two-pronged suggestions. The same college friend I mentioned above said she took her oldest son shopping so he could pick out –and wrap– a few small presents from him to the new baby.

She described how excited he was to give the baby the presents at the hospital. The second part to this suggestion is also having a present for the oldest sibling from the baby.

It’s an unexpected twist for the older child when they don’t realize they’re getting a present, too.

This was a fun suggestion from one Facebook user who said, “You could also find a special stuffed animal for the older sibling and get the same but smaller version for the baby. That way they have the same thing but shows big brother or sister they’ve got the big one.”

This could be another way for your older child to connect with the baby, even though the baby can’t communicate with them.

Have the first-born pick out baby’s outfits

Two different Facebook users suggested this to me. Each saw value in having the older sibling pick out outfits for the baby. This could be as simple as choosing a few outfits for the hospital bag or you could make outfit-selection a daily routine. I think my daughter might really enjoy this as an opportunity to dress a baby — similar to the way she dresses a doll.

I think the most important thing to remember is that parents have the power to ease this transition. A well-adjusted child feels secure and acts out less. It also lessens the likelihood of sibling rivalry down the road.

If you have any more ideas that worked for your family! Send them to me!