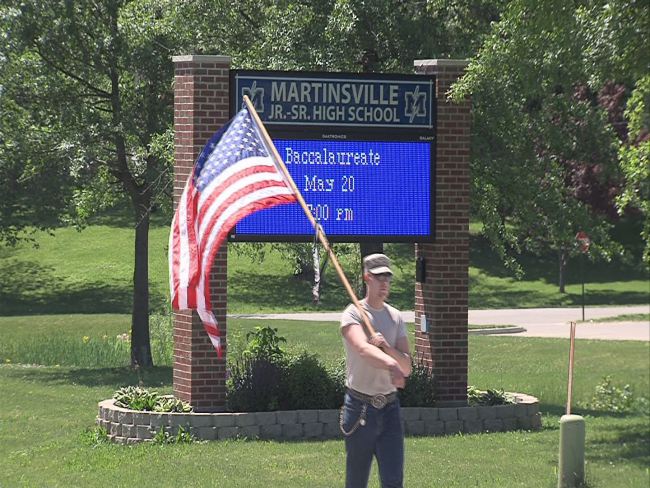 MARTINSVILLE, Ill. (WTHI) –  It was an interesting scene at one Wabash Valley School Tuesday afternoon.

A controversial situation has the community of Martinsville in an uproar. That’s after a teacher was accused of stomping on the American flag in front of students.

Clouser, along with other residents, parents and students, met in front of Martinsville Jr./Sr. High School. All afternoon they took turns walking the American flag up and down the front entrance.

“There’s just so much history in that flag,” said Clouser, “Some good, some bad, but it’s still our flag”.

Nicholas Gibson has a child who attends the school. Gibson is also a veteran of the Marine Corps.

PHOTOS: On the scene in Martinsville

“It should have never happened,” Gibson said, “I’m very proud of these kids that have stood up for what they believe in”.

In a written statement, school officials have confirmed that the teacher involved has been placed on leave for the remainder of the school year. The name of that teacher is not being released.