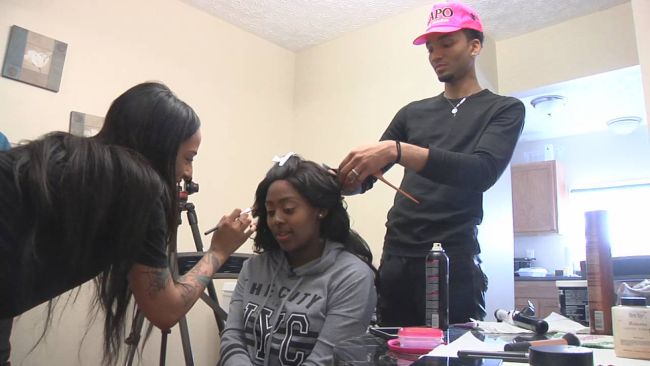 ALCOA, Tenn. (WATE) – An Alcoa High School student got a big surprise when her favorite celebrity hairstylist knocked on her door to give her a makeover before prom.

Hannah Tate was diagnosed with a rare form of kidney cancer last November and has spent most of her senior year at St. Jude Regional Children’s Hospital. After going through chemotherapy, radiation and several surgeries she lost her hair.

The high school senior said she originally wasn’t even sure her health would allow her to go to prom.

“I’ve missed my whole year, my whole senior year. So I mean it was hard missing basketball, and track, and dance and everything,” said Tate.

With prom approaching, she decided to reach out one of her favorite celebrity hairstylists on Instagram, Tokyo Stylez. She asked him to send her a wig.

“I really liked him and all his pictures and his work and would show all my friends,” said Tate.

Stylez has worked with people like Rihanna, Naomi Campbell, and Gabrielle Union.

Saturday afternoon, just a few hours before prom, there was a knock at Tate’s door.

“It took me a second to realize it was him at first, like to actually believe it,” said Tate.

Standing in her doorway was Tokyo Stylez and his team.

“They told me that they wanted to come in and present the wig to her, but they wanted it to be a surprise,” said Tate’s mom, LaVetta Span.

Hannah got the full celebrity treatment: hair and makeup, and a brand new wig.

“She teared up and cried a little bit. I didn’t want her to because I didn’t want to cry,” said Stylez. “It’s like a once in a lifetime thing. You only go to your senior prom once, so to be a part of it is something that she’ll always remember.”

“She just wanted to be beautiful for her prom night and to show her friends and her family that she’s still that beautiful girl that they once knew,” said Christopher Aaron, business manager to Tokyo Stylez.

Tate said the makeover was more than she ever imagined, a chance to shine and for the first time in a long time, not feel like a cancer patient.

“It just makes me smile. It makes me happy,” Tate said with a big smile.