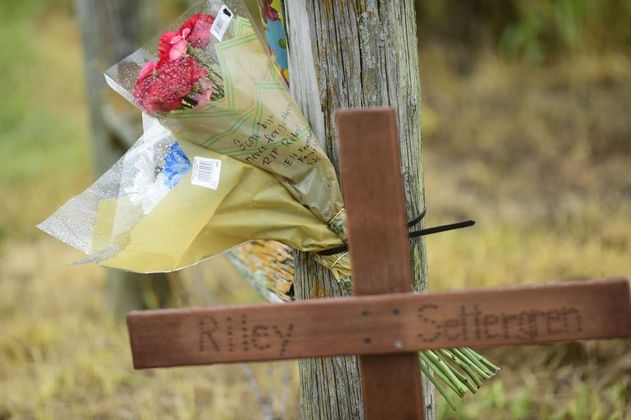 The teen who died in Wednesday afternoon crash in rural Hancock County has been identified as Riley Settergren, a 17-year-old who was about to embark on his senior year at Eastern Hancock High School, according to a report from The Daily Reporter in Greenfield.

The pickup he was riding in with two friends struck a large crop sprayer on a rural Hancock County road, not far from the Settergren family farm.

Two other teens in the pickup – R.W. Locker and Landon Stanley, also students at Eastern Hancock – were taken to an Indianapolis hospital and treated for minor injuries. They are expected to fully recover. Joe Mohr, who was driving the farm equipment, was not injured.PREVIOUS

WARRINGTON, Ind. (WISH) – A teenager died Wednesday afternoon when a piece of farm equipment struck a pickup at a rural Hancock County intersection.

Sheriff Mike Shepherd said the crash was dispatched at 1:26 p.m. at the intersection of county roads 900 North and 750 East, about a mile northwest of the small community of Warrington.

The name of the deceased was being withheld while family is notified.

Two other people in the pickup were injured in the crash and taken to a hospital, although the sheriff was not immediately sure which facility.

“Three of the four corners have corn in there taller than me,” Shepherd said.

The driver of the piece of farm equipment was not injured.

Shepherd said more information about the crash should be available later Wednesday.