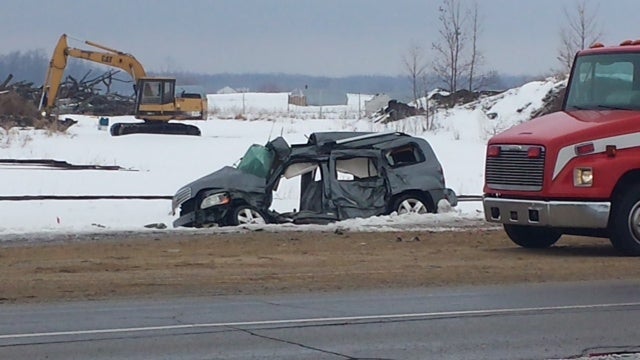 LAGRANGE COUNTY, Ind. (WANE) – The 15-year-old killed in a crash in LaGrange County Tuesday afternoon was a freshman at East Noble High School in Kendallville.

The superintendent of the school corporation said there were extra counselors at the high school, middle school and South Side Elementary, where two of the teen’s siblings attend, on Wednesday, reported WISH-TV sister station WANE News.

Around 1 p.m. Tuesday, police said Maria Ortiz Fuentes, 21, was driving an SUV north on State Road 3. She didn’t stop at the stop sign at the intersection with U.S. 20 and was hit by a grain truck headed east on U.S. 20. As that truck started to roll over onto its side, it clipped a third vehicle that was westbound on U.S. 20.

Fuentes’ niece, Stephanie Zaragoza, 15, was in the front passenger seat of the SUV and was killed in the crash. Fuentes’ infant child, Jazmyn Ortiz, who turned six weeks old Wednesday, was taken to a hospital and released later Tuesday night.

Security cameras at Westpark Auto, which is on that corner, caught it all on tape. It shows Fuentes did not slow down or attempt to stop at the stop sign and the truck didn’t have time to slow down before the impact.

“This is not the first time I’ve seen people cruise through the intersection not even knowing there’s a stop sign,” Chad Fry, the manager at the car dealership, said. “There are signs to let them know there’s a stop sign coming up and that’s it. If you’re not familiar with the area and you’re just driving, it’s very easy to blow that.”

Fry said a bad crash happens at that intersection around once a year. He would like to see a flashing light or rumble strips added to the intersection.

“This crash could have been avoided I think if there had been more awareness that there was an intersection coming up,” he said.

A spokeswoman for the Indiana Department of Transportation said after every fatal crash, INDOT will review the intersection and all the approaches, signs and signals to see if changes are needed. That review will take six to eight weeks.

As of Wednesday morning, Fuentes remained in critical condition.