Teen kills masked intruder who turns out to be his dad 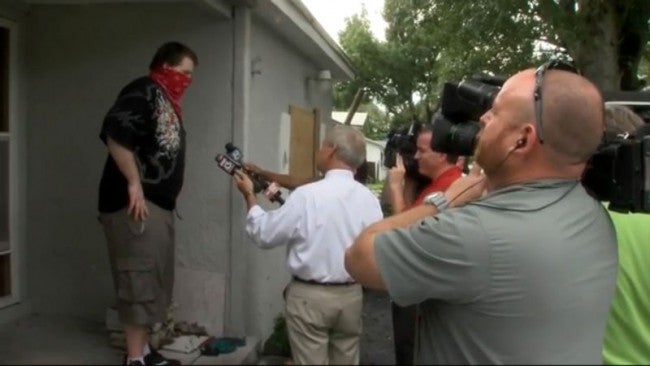 ST. PETERSBURG, FL. (WFLA) –  Investigators now tell us a teen who killed his father Tuesday morning is a case of justifiable homicide. Malachi Heisler tells us he woke up to cries for help early Tuesday morning.

“I woke up to my name being called, okay. I heard the words Malachi and help, that’s all I heard when I woke up,” said Heisler in front of his home. Heisler spoke with a bandana covering his mouth.

“He pointed it at my mother first, and then when I came out of the room he pointed it at me. So picture in your head, it was a standoff between me and him. He had his pistol and I had my rifle. It doesn’t matter a bullet is a bullet, one shot, you’re dead,” explained Heisler.

Heisler, who is 18, said that he was in the home with his mother, her boyfriend and his younger sister. He tells us he only had seconds to make a decision and didn’t know who the man was that he shot until after the gun was fired. Heisler tells us he recognized his father by tattoos and physical characteristics.

“Think of it as a swat get up, you see what swat members wear. Think that, except without a helmet, it was a ski mask,” said Heisler about what his father was wearing.

Heisler said that his mother had a restraining order against his father, after he was arrested at their home in April of 2015 and charged with felon in possession of firearms.

“I had a feeling that something like this would happen but I didn’t know when,” said Heisler, who is convinced his father was there to kill him.

“He wanted to scare us first, and then kill us while we were afraid.” Heisler was released after hours of questioning Tuesday morning.

“He wasn’t a good dad, no (expletive) father of the year awards,” said Heisler finally.