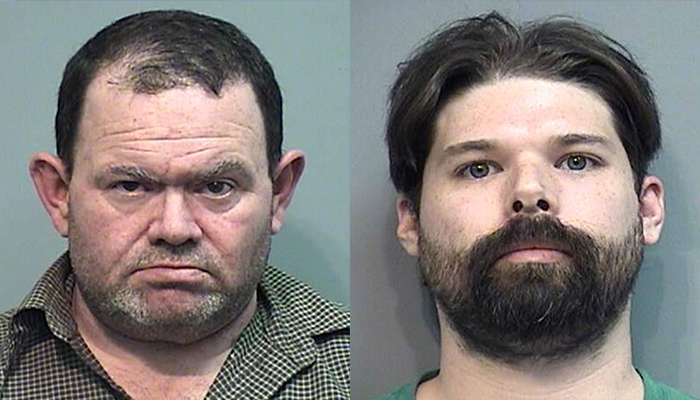 Editor’s note: Details of this story are disturbing

SPRINGFIELD, Ga. (WSAV) – A bond hearing for two suspects accused in the murder of two Effingham County teens reveals further details in the days leading up to their deaths.

Elwyn Crocker Sr. and Mark Anthony Wright are both being held on charges related to the death of 14-year-old Mary Crocker and her brother Elwyn Crocker Jr., who would have been 16 this year.

The teens were found buried near their Guyton home in December.

Bond was denied for both Crocker Sr. and Wright and the cases were bound over to a grand jury.

Crocker, the biological father of Mary and Elwyn Jr., faces multiple charges, including felony murder, concealing the death of another and cruelty to children in the first degree.

Authorities say he admitted to all of the charges, claiming his wife and his mother convinced him to commit the crimes.

Wright is being held on felony murder and cruelty to children in the first degree. He is the brother of the teens’ stepmom, Candice Crocker, and is said to have been living in the Guyton home.

The other suspects in this case — Candice Crocker, Kimberly Wright, and Roy Prayter — all remain behind bars without bond.

According to detectives, Crocker Sr. admitted he buried Mary and Elwyn Jr., behind their home. He also revealed that Mary died on October 28, 2018, nearly two months before her body was discovered during a welfare check.

On Tuesday, officials revealed that Wright called his aunt in South Carolina when he heard the children’s father and stepmother discussing Mary’s death.

JoAnn Groover contacted police which sparked the search for the children.

Crocker Sr. initially told police Mary moved to South Carolina with her mom. But he eventually admitted to killing both Mary and Elwyn Jr., saying Candice Crocker and Kimberly Wright told him to do it.

“After some discussion, he (Mr. Crocker) advised us that Mary was, in fact, deceased and that she was buried in the backyard. They asked him also about Elwyn Crocker Jr., and he then at that time advised investigators that he was also buried in the backyard,” Effingham County Sheriff’s Office Detective Abby Brown explained.

A third child, 11-year-old James Crocker, who has cerebral palsy, was found alive in the home.

“He was laying on the bathroom floor of the master bedroom, covered up in a blanket,” Brown said.

The detectives said James told DFCS about ongoing abuse inside the home.

“James began to utter information about Mary being kept in a dog kennel that was located inside of the kitchen of the home,” Brown explained.

According to Crocker Sr., it was a form of punishment for the young girl.

“He did admit that Mary Crocker was, in fact, kept in a dog kennel, naked, in the kitchen the common area of the house, was zip tied so that she would not get out. We also learned from Mr. Crocker that that was a form of punishment that she had food withheld from her,” Brown said.

Investigators discovered photos showing Mary, naked and malnourished, with bruises on her face, hands, and body.

Brown said she was fed food with rice vinegar and other substances in it to affect the taste, “in hopes that she would not eat.”

“They would not allow her to eat, and if she did, it was special food that was made just for her which has been described by other people as grey and something nobody would want to eat,” Brown added.

Authorities say family members admitted that the 14-year-old was tased.

In addition, they said the child became so stiff from being confined to the kennel, her family would duct tape her to a ladder to straighten her posture.

Wright told investigators he did not know the kids were being abused.

No information was revealed about how Elwyn Crocker Jr., was treated before his death but those details are expected to come out as the investigation moves forward.

We are still waiting for the official autopsies.

According to the Effingham County Sheriff’s Office, several of the suspects have been moved out of the county to separate jail locations for their safety.

Wright is the only suspect being held in Effingham County Jail. Crocker Sr. has been moved to Emanuel County.