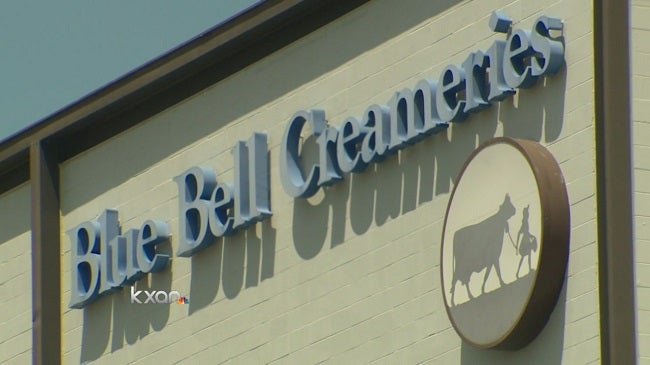 BRENHAM, Texas (KXAN) – The Food and Drug Administration, along with state and local health experts, is trying to figure out how a potentially deadly bacteria got into a Central Texas ice cream plant. Blue Bell confirms two batches of Chocolate Chip Cookie Dough Ice Cream from its Washington County facility contained Listeria, prompting a 23-state recall.

Blue Bell is headquartered in Brenham, Texas, where the creamery got its start 108 years ago. On Tuesday, the Washington County Chamber of Commerce emailed “We Proudly Support Blue Bell” flyers to its 750 members to print and post on their doors across the small town.

“We wanted to show very visibly that this whole town stands behind Blue Bell Creameries,” said Page Michel, president and CEO of the Washington County Chamber of Commerce. She said they are arranging a community wide prayer vigil this weekend for the company, employees and customers.

“They are literally working 24/7 right now to make up for lost time,” said Michel. “We’re encouraging everyone to do the little small acts of kindness, you know, offer to babysit the kids, bring a meal, mow the lawn, little things so that they can spend the time they have away from the plant with their own family.”

Around town it is hard to not see anything Blue Bell-related. The company’s logo is plastered on murals and Blue Bell memorabilia hang as decorations in stores and businesses across the city.

Restaurants like Must Be Heaven, located in the town’s square, have a display case dedicated to Blue Bell and take pride in the company’s rich flavors and history. Included with a sign explaining why they are not selling the ice cream was the message, “The best things in life are worth waiting for.” Store owner Charlie Pyle said he does not plan on having any substitutions for ice cream.

“Absolutely not. Not only might I get run out of town, I wouldn’t even consider anyway – no Dippin’ Dots, not any other brand,” said Pyle.

A Blue Bell spokesperson told KXAN it first had a problem at its Brenham facility in March and was able to isolate the Listeria to one machine, shut it down and close off the room. Then, they had another problem at their Broken Arrow, Okla., plant after a 3-ounce cup and pint of Banana Pudding ice cream tested positive for Listeria.

This week, a half-gallon of Chocolate Chip Cookie Dough from the Brenham tested positive for Listeria,prompting the massive voluntary recall of all its products.

“We got to do what’s right here and be 100-percent sure and let’s pull out all the products in 23 states,” said Joe Robertson, Blue Bell’s advertising and public relations manager. “We want everyone to know that every decision that we made along the way, whether it was to have recalls or suspend operations to the facilities, is that we have the consumers in mind when we made those decisions. It’s important that they know that.”

Robertson said Blue Bell is working with the FDA. State and local health departments have assembled a team of local experts, including some microbiologists, to narrow down how the Listeria got into their facilities.

“It’s emotional for us a little bit because we haven’t gone through anything like this, and we have so much support from our consumers, from our retail partners,” said Robertson. “Our plan now is to just work our way back, earn our way back, and come back stronger and better than we were.”

Blue Bell is still producing ice cream, but Robertson said they are testing the ice cream, holding it, and when the results come back negative, they will distribute it. The test results take about three days.

There is not an exact timetable for when Blue Bell ice cream products will return to the shelves, but the company said some stores may have it back in the next two weeks. They admitted that was being “optimistic.”

According to the Centers for Disease Control and Prevention, 10 people in four states were treated for Listeria, and three deaths in Kansas were linked to the illness.